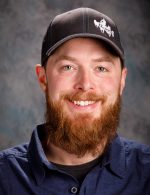 Michael Baker, 31, was born and raised in Denver, Colorado. At the age of 20, he moved to Boise, Idaho to be near family. Pursuing his passion for culinary arts, Michael co-founded an artisanal donut shop and bakery in Boise, Idaho. He originally came to Alaska for a summer season in 2009 to learn the art of handling sled dogs. In May of 2014, he returned to Alaska with his sights set on a new goal; becoming a professional Dog Musher and one day racing in the Iditarod, a feat he accomplished in 2017. For the last five years he has spent summers working his way from Dog Handler to Base Operations Manager for Alaska Icefield Expeditions in Juneau, Alaska. During the winter Michael spends his days at 17th Dog/TMF training and racing. Among dog sledding and tending a handsome beard his hobbies are music, exploration, baking, fly fishing, donuts and cribbage. He is the father of an amazing young man, Siris Harlo Michael Baker, age 9.