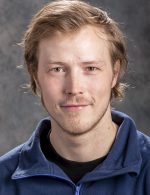 Niklas Wikstrand, 28, was born and raised in Romerike, NORWAY. He first became interested in dog mushing while watching “Iron Will” as a kid. But his first experience came when he started a class called “Mushing & Outdoors Life” at the school, Folkehøgskolen 69° Nord! Then he had one year as a handler and soldier in the Norwegian Air Force-K9. After that he studied biology for one year and ran a recreational team. In 2013, he moved to Svalbard to become an Arctic Nature Guide. After graduation, he worked as a guide taking guests out with dog sleds, kayaking, hiking, skiing, snowmachining, glacier walking and camping, until he came to Alaska in 2016 to be Pete Kaiser’s handler for one year (and has now been there three years). When he is in Norway, he still works as a guide and the last year as an assistant at the local veterinarian clinic. Niklas lists his hobbies as climbing, biking, reading, Ice Hockey, snowmachining, hiking and camping. He says, “I am looking forward to the adventure of travelling through Alaska with the dogs I’ve gotten to know for the last three years. I don’t know which of Pete’s dogs I will be running, but it doesn’t matter, because I like them all and I think we’ll have fun out there.”