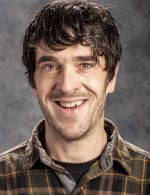 Richie Beattie, 47, was born and raised in Owosso, Michigan. He moved to Washington, where he worked as a carpenter’s apprentice and climbed mountains. He says the mountains called him to Alaska. So in 2000, he and six Alaskan Huskies came to Alaska chasing a dream. He and his wife, Emily Rosenblatt, have raised all the dogs in their team. He is a two time finisher of the Yukon Quest and was the Rookie of the Year in 2006. Running the Iditarod and seeing so much of remote Alaska, with a team of his own, bred, raised and trained by them, has been a dream for a long time. “We are excited for that time to finally be here,” said Richie. Richie lists his hobbies as fishing, hunting, hiking and biking. His son Osha, is 8 years old.