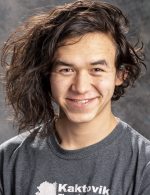 Martin is a 21 year old Inupiaq and Norwegian musher. He went to school in Norway where his family had a dog mushing tourism business in Narjordet, close to Røros. He started mushing when he was four years old, with one dog and a tiny sled. In the summers he lived in Kaktovik where he went hunting, camping and fishing. Martin ran the Femund Jr. Race, a 220 km race, in 2012 and 2013, with six dogs. In 2015, the family moved their racing dogs to Alaska. His dad, Ketil Reitan, has finished the Iditarod seven times. Now Martin is running with some of the dogs they brought from Norway in2015. They bought other dogs and have two from a littler born in 2015 while they were driving the Dalton Highway. In 2016, Martin started working with the family business, Kaktovik Tours, taking people to watch and photograph polar bears from a boat near Kaktovik. He has worked as a captain on his boat ever since. During the winter of 2017, Martin finished the Knik 200, the Copper Basin 300, the Two Rivers 200 and the Kobuk 440. Our family goes camping and sheep hunting in the Brooks Range with the dog team and Ketil drives a snowmachine. Martin says, “Traveling around rural Alaska with the dog team is special to me because that’s how my Inupiaq ancestors used to travel. Martin lists his interests other than mushing as photography, music, sailing and climbing.