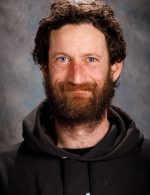 Nicolas Petit, 38, grew up in Normandy and always loved animals. He moved to New Mexico in 1992, where he finished high school and then to Alaska because he “loved snow.” He adopted “Ugly”, a gorgeous Alaskan Mutt, put a harness on him and the adventure began. He traveled all over the state and began racing while working for Jim Lanier. “In 2011, Jim’s hip gave him trouble, so I took his wonderful white dogs to Nome.” He also lived in Girdwood, Alaska, and worked for Dario Daniels, whose training techniques live on through Nic’s calm mushing demeanor. During the last six years, he has run dogs from Raymie Redington and bred a female to his favorite Redington dogs and created a magnificent group of athletes that have proven that they have what it takes to win the Iditarod and any other race out there. He won the Fastest Time from Safety to Nome award in 2017 and again in 2018 and was the second musher to finish the race in 2018. Nic lists his hobbies as snow, dogs and travel!