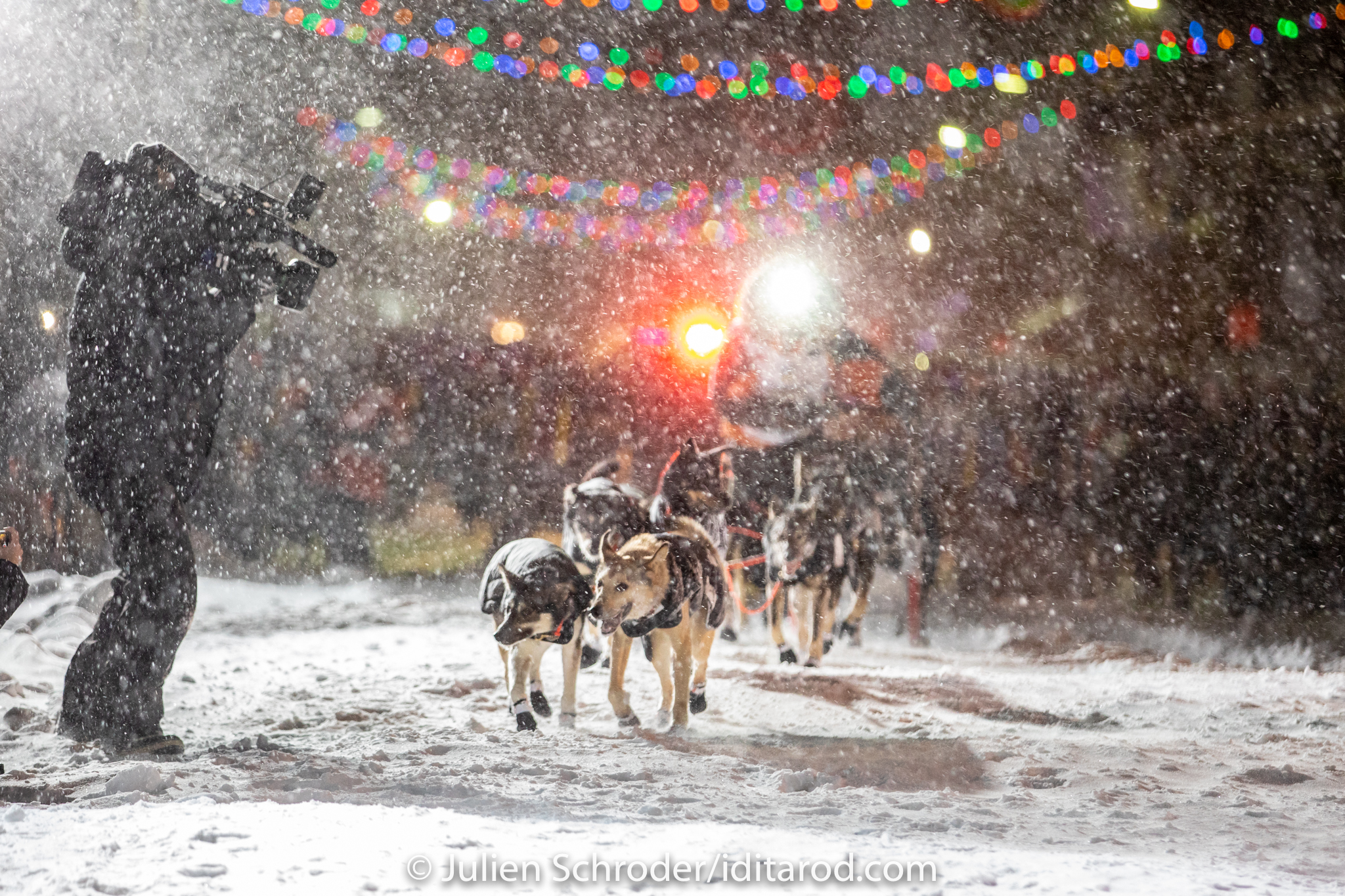 This year’s Iditarod champion finish was quite an exciting, memorable, and historic one! Beginning just after midnight, Iditarod fans began to line the chutes of the finish line. There was a steady wind that seemed to pick up as the time waned, and the falling snow was incredibly fitting for the occasion. Industrial flood lights lit up the Burled Arch and also the new Dodge pickup truck that awaited the champion. Although Pete Kaiser still held his lead, the GPS tracker showed that Joar Leifseth Ulsom, the 2018 Iditarod Champion, was slowly closing the gap between first and second place.  The anticipation was rapidly increasing around 3:00 A.M. The crowd grew larger every moment while Pete’s lead simultaneously diminished.

However, at around 3:35 A.M., the booming siren went off and alerted everyone that a musher was close. Whenever a musher is about a mile away and approaching Front Street, a loud siren is played, and this gives everyone the opportunity to make their way to the finish line. An official announced to the crowd that Pete Kaiser was on Front Street and moments away from reaching the Burled Arch. At 3:39 A.M., Pete Kaiser became the 2019 Iditarod Champion. And, only twelve minutes later, Joar Leifseth Ulsom became the second place finisher. 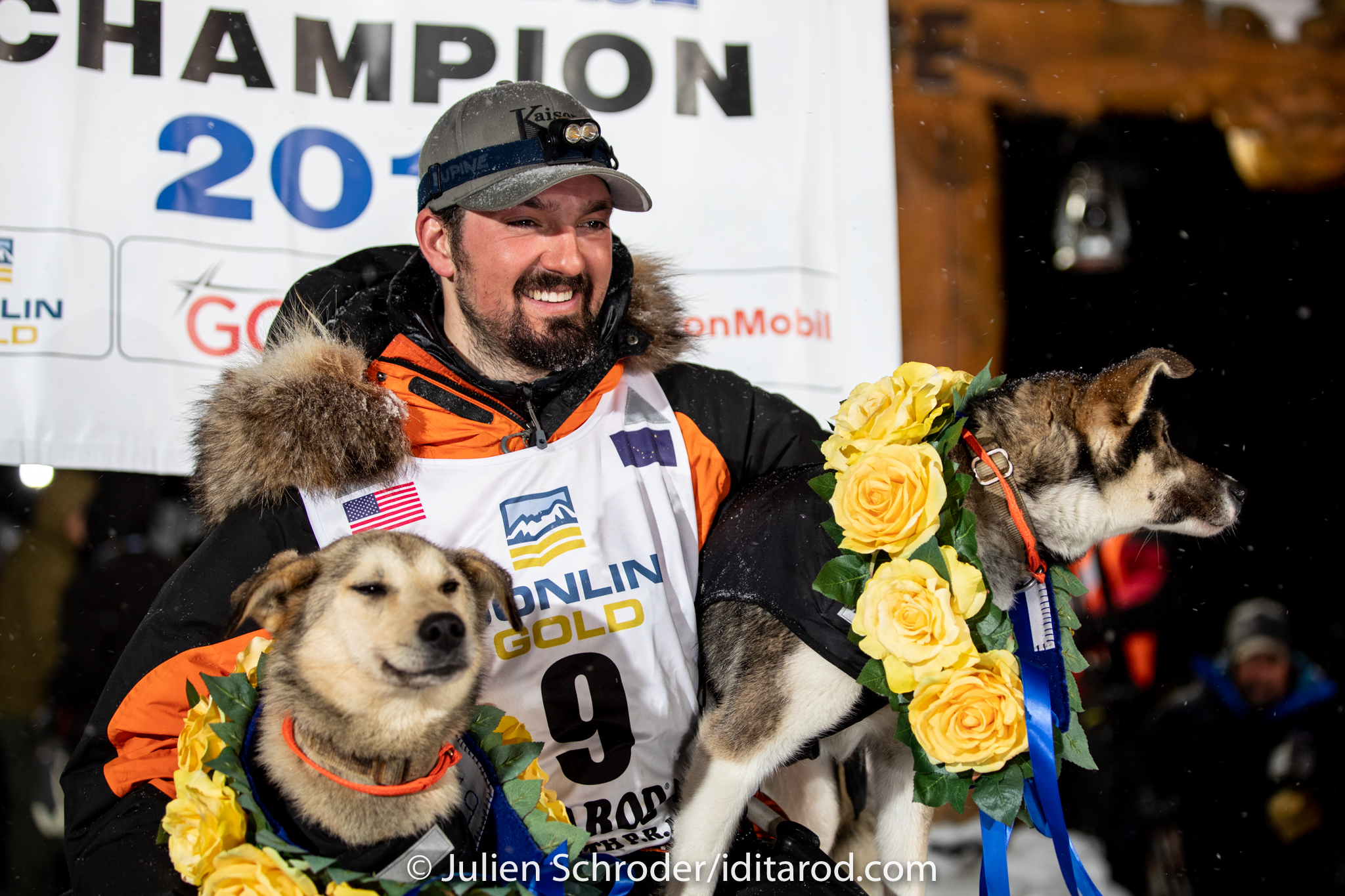 When Pete made it to the finish line, he ecstatically embraced his family who was as equally excited to see him. He went around to all of his dogs and showed his appreciation and gratitude with hugs, rub-downs, and delicious snacks. Pete also victoriously held up his arms and turned to face and see his fans in all the different directions. He was especially happy to see his friends, family, and neighbors, many of whom were from his hometown of Bethel, AK. 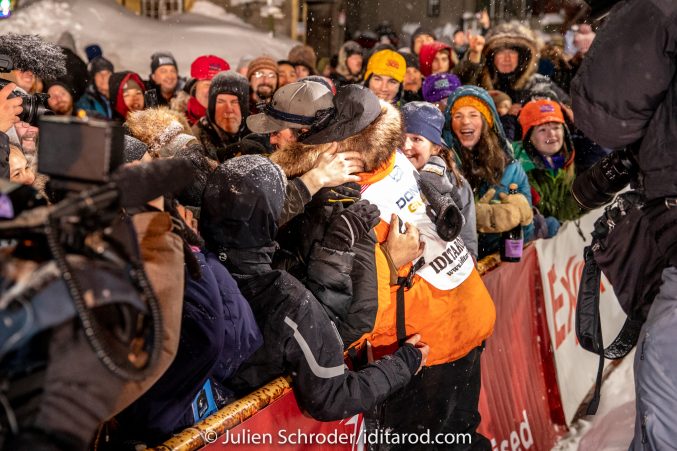 While every Iditarod champion finish is historic in its own regard, Pete’s was memorable because he became the first Yup’ik musher to win the Iditarod. Congratulations to Pete Kaiser! It was a well-deserved win, a great race, and an exciting finish.

***Teachers*** Have your students conduct research on the different Alaskan Native Cultures and share their findings. Students can learn about the various cultures, values, languages, regions, populations, histories, and more.