More times than I can count or even remember during the 2006 Iditarod, I found myself in the presence of Iditarod icons, not only people who raced but people who in the early days helped make the race happen. 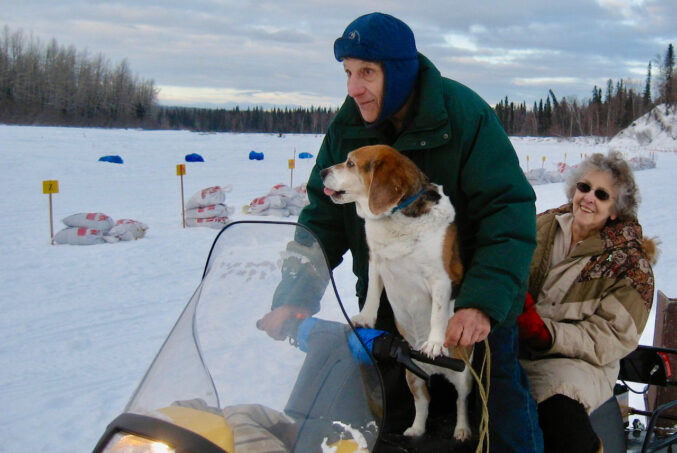 On the first evening of the 2006 race, I was seated across the table for Joe and Norma Delia while eating supper in the Skwentna Outback Cabin.  Mushers would arrive at the second checkpoint a few hours later but in the meantime, thirty some volunteers sat down with the founders of the checkpoint to share stories over a meal prepared by the Skwentna Sweeties.  Surely this was heaven, or at least, Iditarod heaven.  These were folks who made the race happen!

I dreamed about meeting the people who helped Joe Redington locate and reestablish the Iditarod trail.  I dreamed about meeting the crew of people who make a check point like Skwentna a beacon in the night for mushers in route to Nome.  There I was sitting in a cabin filled with excited volunteers and across the table from Joe and Norma, listening to their stories about the first races.  This was no dream it was REAL!

Prior to the inaugural Iditarod in 1973, Joe Delia bumped into Joe Redington in the woods near Skwentna. The two fellows began to chat and Joe Delia listened as Joe Redington described his dream of Iditarod and the need for locating the old historic Iditarod trail.  This was Joe Delia’s trapping ground and he knew every nock and cranny for miles around like the back of his hand and soon volunteered to locate and break trail for Joe Redington’s dream race.

Not only did he locate and open the trail but he also volunteered his home for the checkpoint.  His wife, Norma, stepped up with the Delia brand of hospitality, opening their home to the mushers and volunteers.  She sought the help of friends and local women to host the checkpoint and serve food just as Joe did to handle the teams down on the river.

It didn’t take much prompting to get Joe or Norma to tell stories of those first races.  They were living breathing encyclopedias of the early races and it was my great and unforgettable honor to share time with them in 2006.  It was also my great fortune to return to Skwentna for another ten years as a comms volunteer.  Skwentna was the definition of teamwork and it was all started by a young woodsman/trapper who took a fancy to the land and decide to establish his homestead on the high bank of the Skwentna River and his generous wife.

Joe and Norma have both passed away but their brand of hospitality lives on in Skwentna.  During the 2021 race, Skwentna received the Golden Clipboard Award honoring their welcoming service to all mushers. 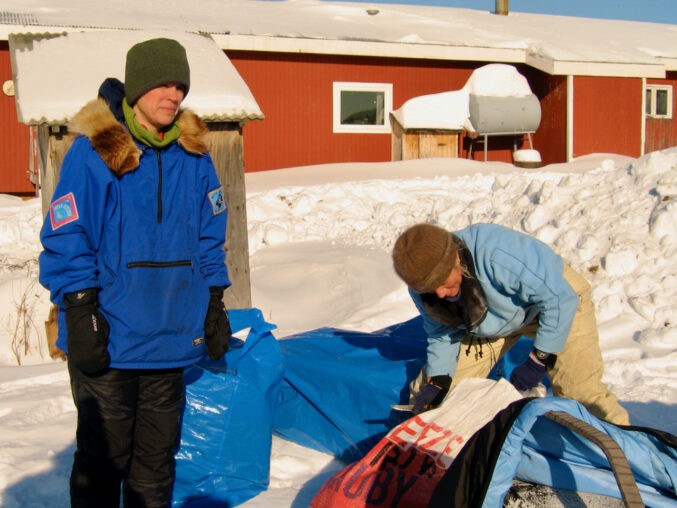 There was another trail experience in Ruby that was equally awe inspiring.  Meeting iconic racer and dog woman, Susan Butcher was also on my dream list.  Susan wasn’t racing because of illness.  It was announced at the banquet that Susan had hoped to be in attendance but her post chemo blood counts were not where they needed to be for being out in public.  Meeting Susan would be postponed.  Little did I know that just a few days and a few checkpoints later, my dream would be realized.

I was delivered to the village of Ruby along with Jeff Schultz by Iditarod Air Force pilot, Danny Davidson.  We made our way down from the airstrip that was perched high above the Yukon River to the checkpoint.  Kids with autograph books were waiting to secure signatures of arriving mushers.  Adults from the village along with press people and volunteers were just as excited as the kids were to see the mushers and the dog teams.  Susan Butcher and her family – husband David and daughters Tekla and Chisana were among those waiting!  My dream came true in meeting Susan and having time for conversation.

As DeeDee Jonrowe approached the checkpoint, Susan put her outdoor gear on and carried the checker’s clipboard outside to check DeeDee in.  As DeeDee’s team trotted up the incline to the checkpoint, Susan turned her back.  When DeeDee pulled to a stop and set her snow hook, Susan turned to DeeDee and said, “Welcome to Ruby.”  Susan was the last person DeeDee expected to see on the trail.  When it finally registered, there was much laughter, many hugs and even a few tears shared by the close friends before Susan had DeeDee “sign in” at Ruby.  It was a cherished heartfelt moment between dear friends, both very familiar with the tribulations of cancer and cancer treatment.

Susan, owning four Iditarod championships, is the first and only woman to win multiple Iditarod races.  As a musher she is known for her exemplary dog care and innovative training.  She is also the author of Granite, a book about her remarkable indomitable leader.  Susan passed away in August of 2006.  Her legacy lives on through her family, Trail Breaker Kennel located in Fairbanks and through mushers who have emulated her techniques with dogs.

Moments on the trail like these are what make being Teacher on the Trail an unforgettable and inspiring experience.  Iditarod has become the great sporting event it is today thanks to iconic dreamers and doers.