On the Trail in Nome – Wednesday

I know I have said this recently, and I will probably say it again, but today was incredible.

But let’s start with a recap of last night after putting up my post. I was able to get into the chute, under the famed Burled Arch on front street for the 5th-9th place finishers, Pete Kaiser, Richie Diehl, Chad Stoddard, Aaron Burmeister, and Ryan Redington. They were all welcomed by their families, friends, and supporters. Aaron, being from Nome, was welcomed by a small group of Alaska Natives performing a dance and song. He announced earlier in the race this year that he would be stepping away from racing for a while to focus on family. Knowing this, but hoping it was not true, a member of the crowd shouted “You’ll get ’em next year!” to which Aaron could only smile. There was a noticeable sense of relief and joy from everyone there. One thing that was also noticed at the arrival of every musher on the first day, was the presence of Brent Sass. After running across the state of Alaska with minimal sleep, he still made it a point to greet every fellow competitor, even when Ryan didn’t cross under the arch until 12:26am. This was truly a class act move. After the chute was empty, I actually was able to introduce myself and chat with Brent about the race on our way back to our respective homes away from home. I asked him about other races this year and finally commented to him that I was really impressed with him coming out for every other musher that day. He responded by saying, “The mushing community is tight, that’s just what we do.” These words were certainly evident by his actions that day. 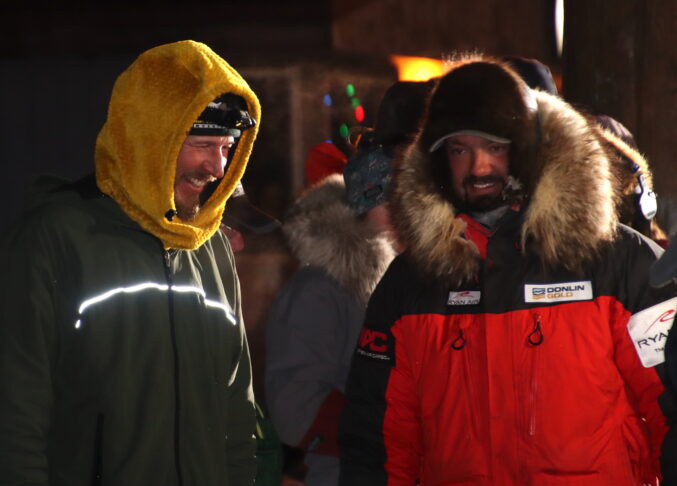 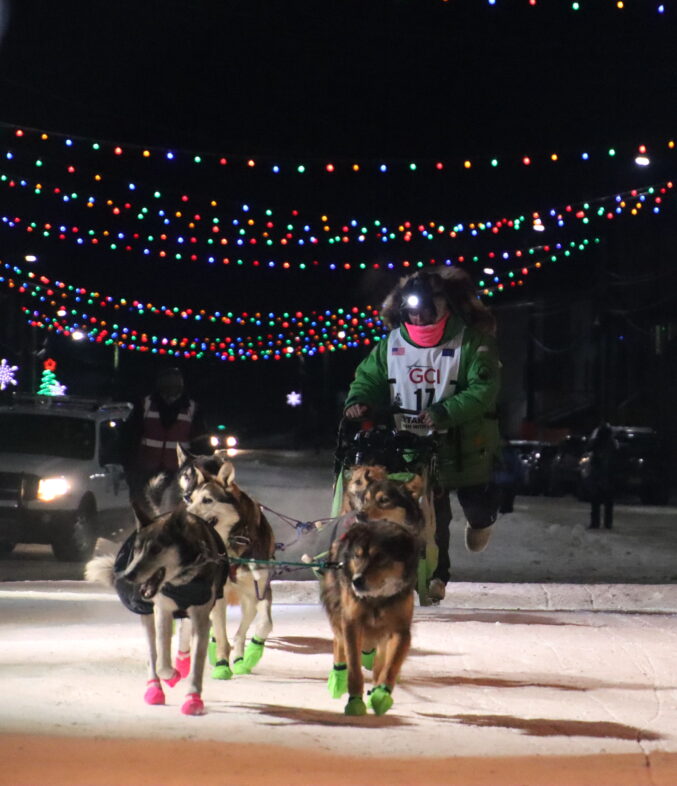 The next morning started bright and early, as I was awaken by the sound of the alarm, signaling the near arrival of a musher. I was about to very quickly get dressed, and hurry down to the chute to see Travis Beals already across the finish line. I then stayed for the arrival of the next 4 mushers, Ramey Smyth, Mille Porsild, Matt Hall and Mitch Seavey. Ramey was greeted by a giant hug from his daughter, and then let her be his second Iditarider, as the team made their way from the finish to the dog lot. Mille talked about her difficulties adjusting to an unfamiliar sled, but was very grateful to Mitch for letting her borrow it. One of the more interesting things of note was the construction of Matt Hall’s sled, as it was built using hockey sticks. When asked about it he said he built it himself, and it is the only sled he has used. He did mention that it is a little tricky to steer sometimes because it bends so easily, but that it also holds up very well. Waiting for Mitch to cross the line were 4 generations of Seaveys. Dallas and his daughter, Annie were there to greet him, along with his father, Dan Seavey. It was truly a family event for everyone. 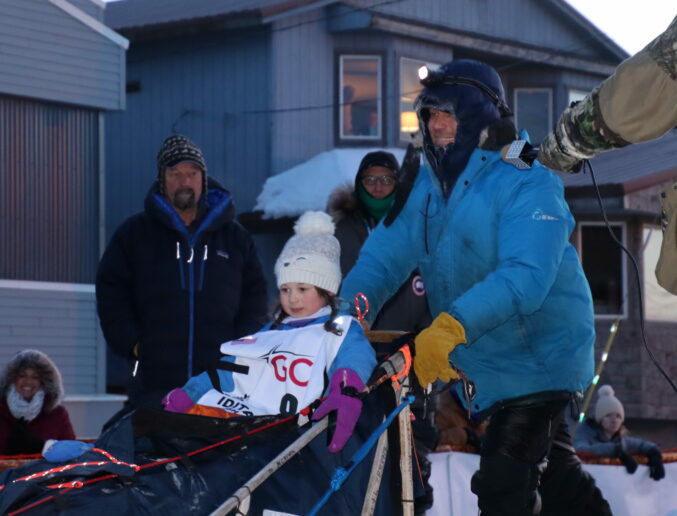 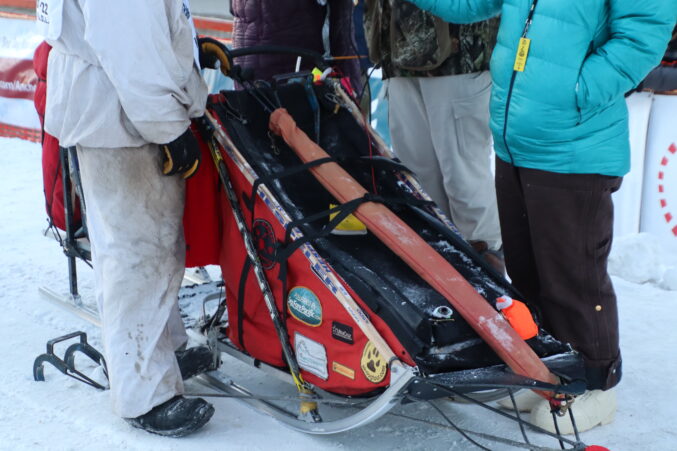 Right place at the right time; a saying that rung true today. With that in mind, this is a 1,000 mile race and the safety of the dogs comes into play, which was the basis of this next encounter. I was walking the streets of Nome, trying to find a street that led to the Foster Museum. I was walking around for what felt like forever, and then suddenly, Michelle Phillips’ team jumps off the beach onto Front Street. Her lead dogs led her to a parking lot on the opposite side of the street that she had just come from. As I looked on, it seemed like she was struggling to get them headed back towards the arch. I ran up and she said to grab the harness to get them back on the street. Once I got up there and got them heading back towards the street, they started running again, but right at me. Not wanting to get taken out by the line, I quickly ran to the opposite side of the street to get out of the way of the team, but they decided to follow me! We then had the same problem on this side. After again, getting them pointed in the right direction, they started running towards the arch. I ran maybe 1/2 a block next to them to keep that momentum going, and then watched them run off towards the finish line.

It was another moment that I will not soon forget.

I then was able to proceed to the Foster museum where, after getting a recommendation from Richard Burmeister the night before, listened to a talk from Howard Farley. Mr. Farley told some amazing stories of the old days when he ran the Iditarod and other momentous occasions throughout his life. He was telling about having Libby Riddles running dogs in his front yard, how he returned dogs in the early days of the race and how he got to know everyone in town by being the town butcher for many, many years. Father of 10 children, he stressed the importance of 2 words to the audience. After being on the trail for weeks at a time running the Iditarod, and his wife being at home with 10 kids, they are words that he made sure to teach his boys; “yes dear”. Very wise words. He also has been a huge advocate for the EDU program with Iditarod talking about the Teacher on the Trail™ position and how most people in the audience probably first heard about the race in elementary school. He was delighted when he found out that I was the teacher for this current year and we chatted 1-1 for a while afterwards. He is just a fascinating person to talk to. 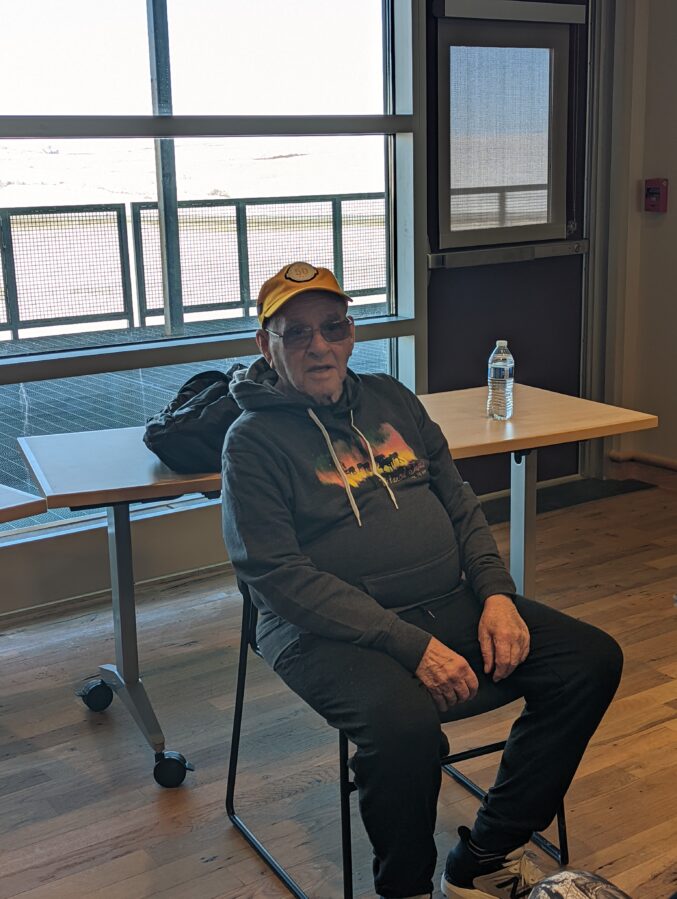 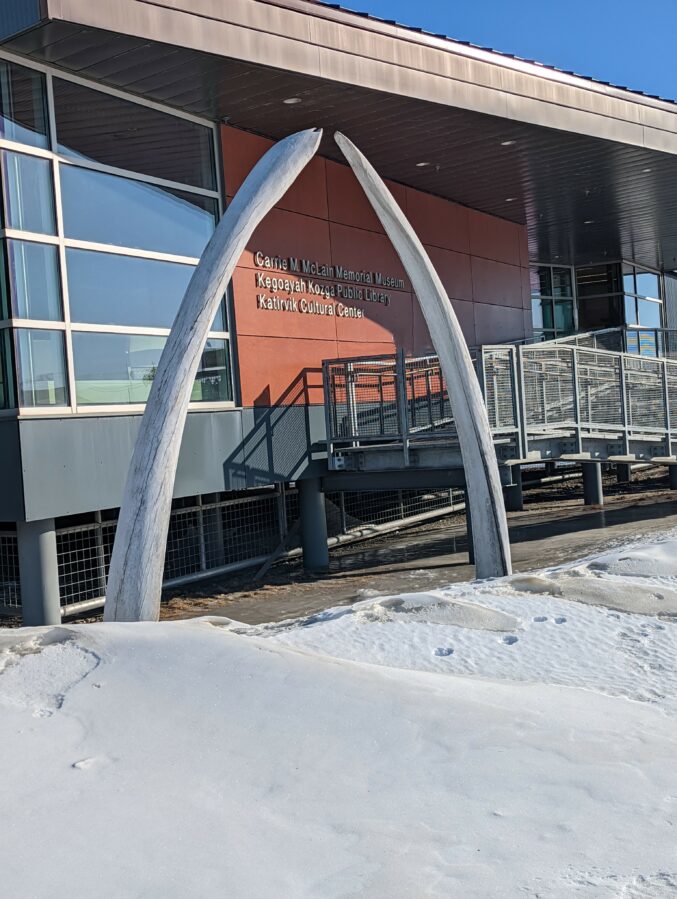 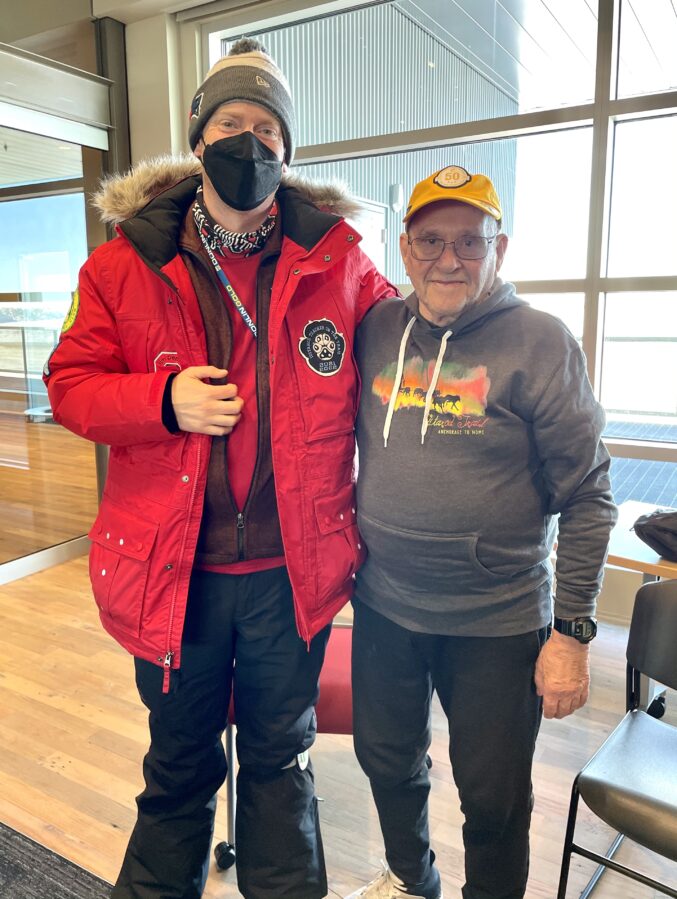 Upon my return from the museum I was able to greet a couple more mushers under the Burled Arch. Hanna Lyrek and Paige Drobny who were racing together for the last bit of the race both ended up in the chute together for the first double sleds under the arch this year. They both looked so strong crossing the finish line and in doing so, Hanna claimed this year’s Rookie of the Year award finishing in just over 10 days, in 19th place. 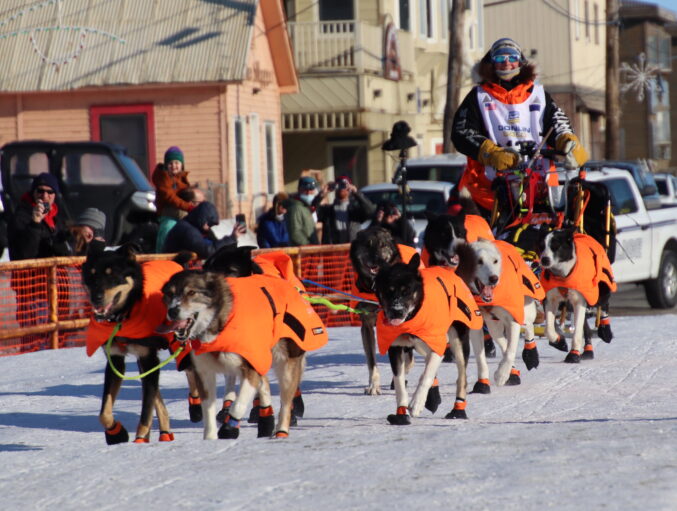 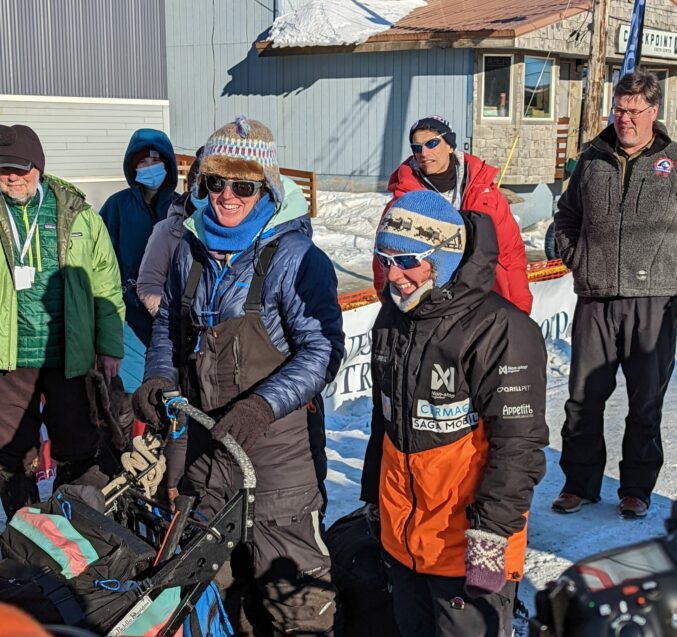 Hanna and Paige under the arch. Photo credit: Jim Deprez 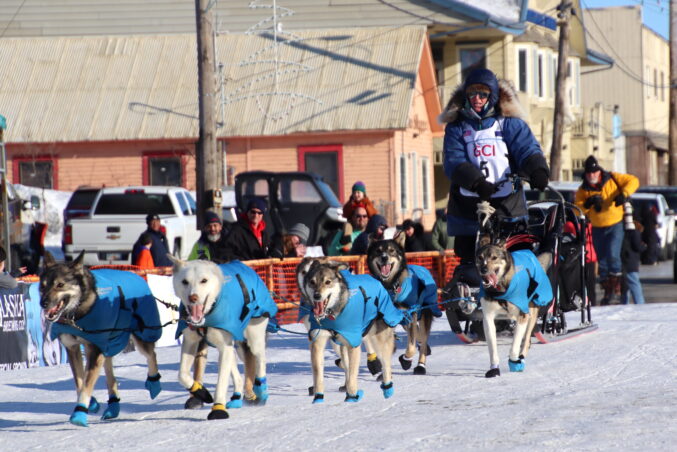 Later that afternoon, I met up with Ranger Katie again. She had offered to drive myself and Jane Holmes out to Fort Davis to see more of the trail that we normally would not be able to see. We ended up driving almost the entire way to Cape Nome. During the drive, we passed many small buildings on the frozen Bering Sea, which she informed us were gold drilling cabins. The surrounding landscape was full of reminders of the old gold mining days in this area, the rusted mining dredge that sits along the road being the most prominent. It was an incredible opportunity that couldn’t have been possible without her incredible generosity. 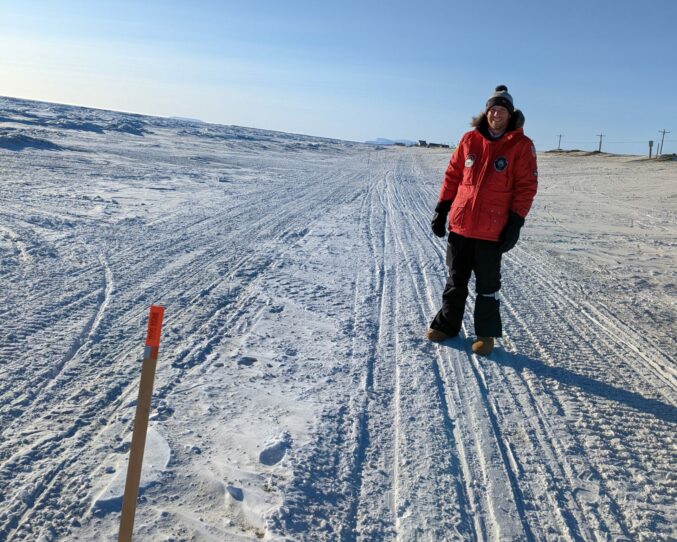 Me on the trail outside of Nome. Photo credit: Jane Holmes 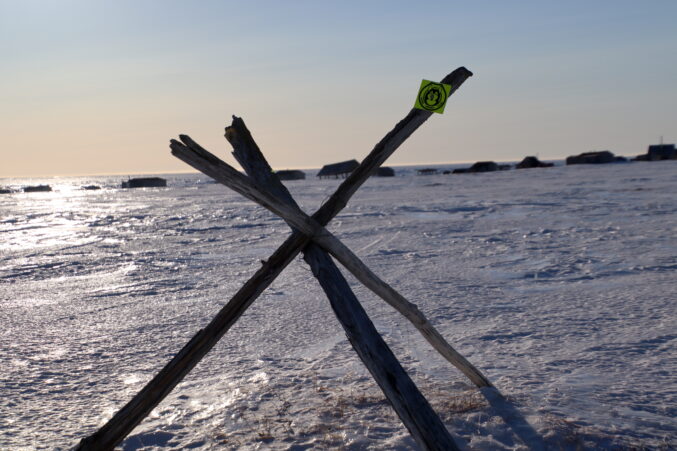 Adventures of Booloo today were actually both from late last night. This was a 1-2 punch from the top 2 finishers. 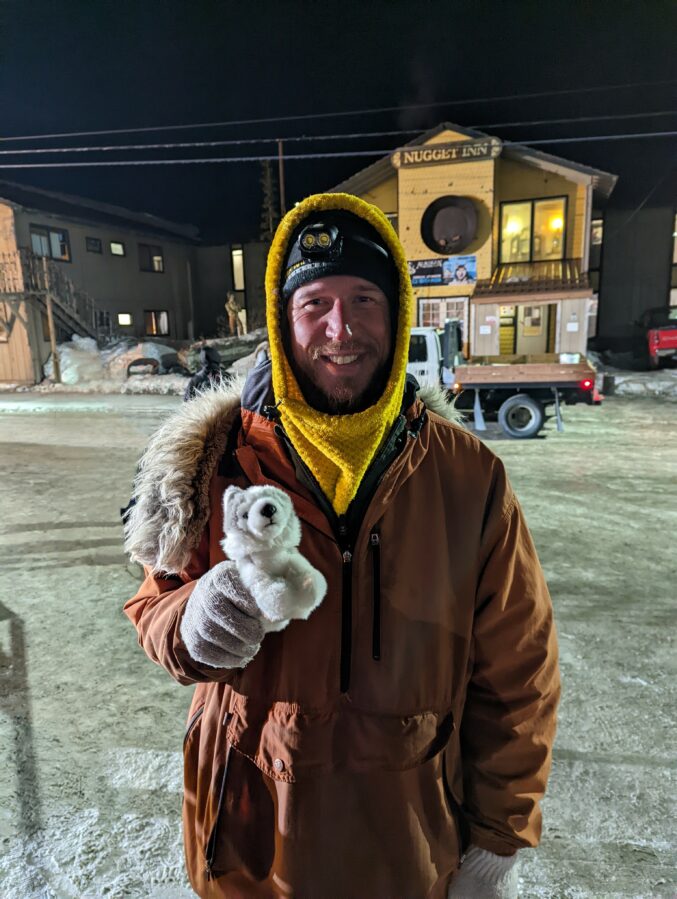 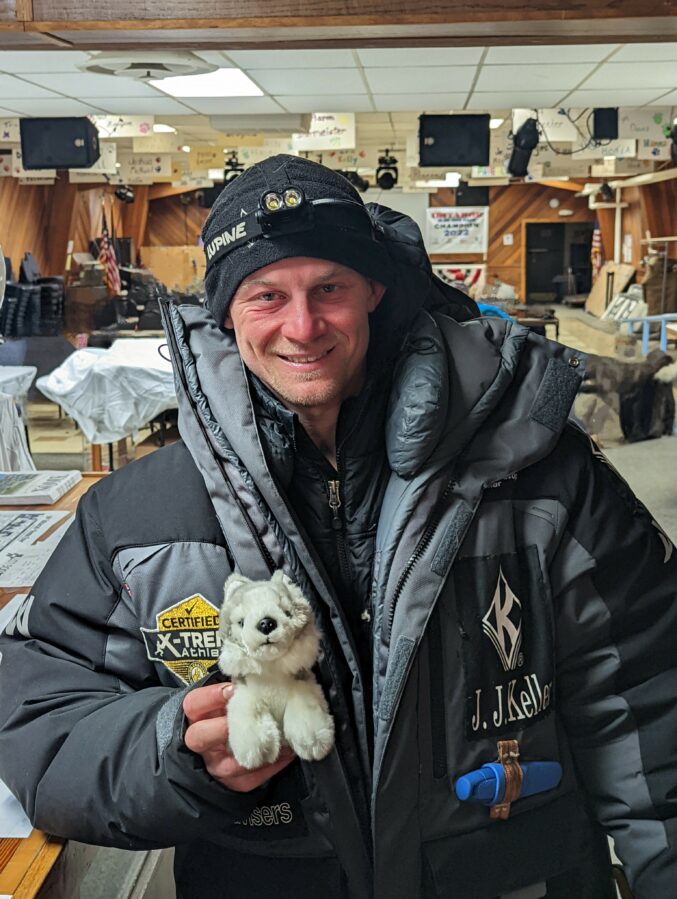 Teachers: As Mr. Farley stated in his talk, the Iditarod is a dog-centered sport, but it’s also a people event. It could not be done without the volunteers, the sponsors and the ITC itself. He said however that it starts with education. If people don’t learn about it, they will never understand how incredible this whole race is. And he said it has much to do with the EDU department and the Teacher on the Trail™ program. I CANNOT urge teachers out there enough to apply for this incredible “once in a lifetime” opportunity. If you teach Iditarod, give it a go! That is the only reason I am here today. To learn more about applying, click here: https://iditarod.com/edu/iditarod-teacher-on-the-trail-application/