Voices of the Volunteers: Jeff Schultz

This is the first in a series of new posts entitled “Voices of the Volunteers”. For those who have followed the race for a long time already know, the Iditarod would not even be possible without the help of the volunteers. Therefore, I have decided to do this piece as an homage to all of the volunteers over the years, for without whom, we would never have made it to the 50th running of the “Last Great Race on Earth”. In this monthly article, I will share with you some stories from the faithful volunteers and their time on the trail, but also get to know who they are as individuals, what got them involved in Iditarod in the first place, and what drives them to return. These volunteers cover many facets of the race and will include Iditarod Air Force (IAF) pilots, communications workers, veterinarians, checkpoint checkers, and I have chosen a familiar face to kick this off. 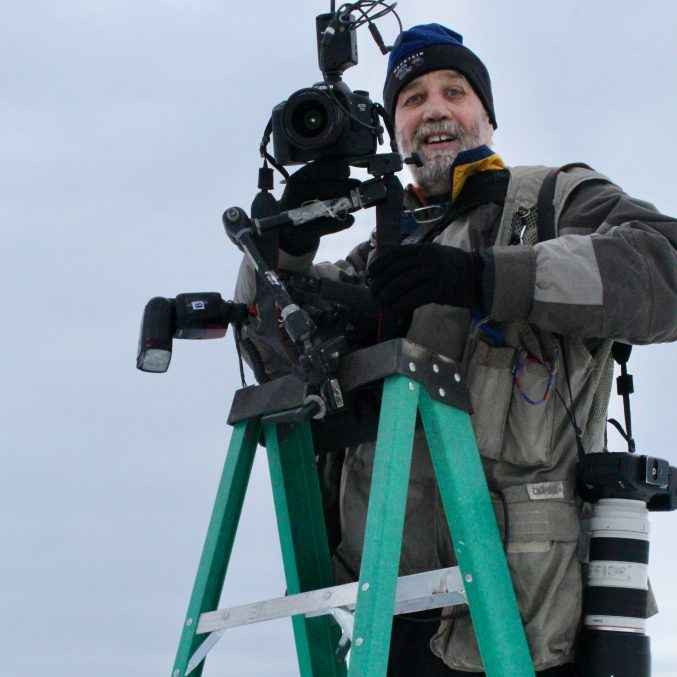 We have all seen his pictures in numerous places throughout the Iditarod; programs, magazines and websites to name a few. Jeff Schultz is not only the current official photographer for the race, but he has been capturing Iditarod images and documenting the history of the race since 1981. His lens helps those from afar feel like they are up close and personal with the dogs, landscape and people of the Iditarod. His current and ongoing project titled “Faces of the Iditarod” is a captivating account from those who have had an active role in the race. Since he has not been featured in his own project, I wanted to make sure he was highlighted here.

Through this first installment of “Voices of the Volunteers”, we get a chance to meet the man behind the viewfinder and learn more about his journey with the Last Great Race over the past 40+ years. Here is a little about the incomparable Jeff Schultz.

How did you get started in photography? 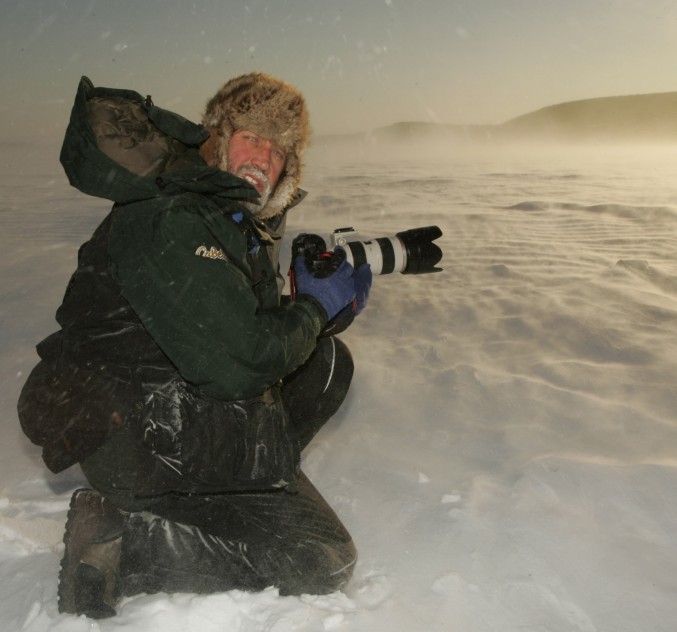 Schultz: I’m [originally] from the bay area in California. In 7th grade at the parochial school, my best friend Bob brought his brother’s Pentax 35mm camera to school; I was 12 years old. I just loved it, so then I started taking pictures, and my brother-in-law especially encouraged me. He said, “Jeff, you take really good pictures!” Now I didn’t know that, because I’m just taking pictures, but when other other people said it I thought, “Well, I just might have something here”. Then one thing led to another and no pun intended, but things just kind of clicked. I took some classes on the science of photography, but most of it I just read in books. I was just 13-14 years old, so I read books on the science of photography. I made a lot of mistakes, and that’s just the best way to learn.

I read a book about a guy who moved to Alaska, lived off the land, built a log cabin and I go “That’s for me”. I’m not a big people person. I didn’t care for all the people and the pavement in the bay area. So at 18, pretty much right after I graduated from high school, I moved to Alaska because a year earlier I wrote to a Sizzler restaurant, a steakhouse chain up here and said “Hey, I’m a cook at a restaurant, could you use a cook?” and they said, “Sure, come on up”.  So, one thing led to another and now I’m 61 years old and still making mistakes, and still having fun taking pictures!

Schultz: I was at a Bluegrass concert in 1980, and it turned out it was actually a fundraiser for a dog musher; Colonel Norman Vaughn. 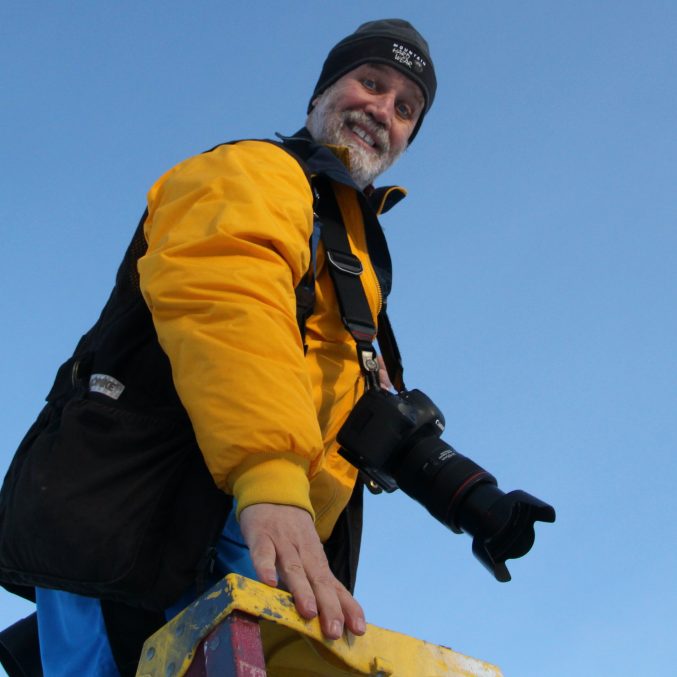 They introduced a number of mushers who were there and Joe Redington was one of them. I didn’t even connect the dots other than he was famous, Alaskan, and something about a sled dog race. I didn’t know anything about it. I thought it would be a good idea to photograph a famous

musher because I was a budding wedding and portrait photographer. If I could photograph a famous Alaskan, it could help my business, so I set up an appointment with him. It took 4 months, but Joe Sr. told me everything about the Iditarod and I got sucked in.

1981 was my first Iditarod, and I paid my own way. I just flagged down a pilot who was willing to fly for gas and oil, and I had $500 and that got me as far as McGrath. So I paid my own way, I donated my photos afterwards to Dorothy Page, Mother of the Iditarod, published the Iditarod Annual, and she was thrilled because I donated them for free. Somebody said, “The pictures were great, and if you do that again next year, we’ll pay for your gas and oil and you can be one of our official photographers”.

Joe Redington is a guy who wanted to get everybody involved with the Iditarod in one way or another. He said, “Jeff, I got 100 sled dogs here. If you want an adventure (because I had just moved up from California) I’d loan you 20 of them and go to Nome with a dog team!” I said, “I can’t do that”. So he said, “Well, you’re a photographer, come take pictures for us!” That was my invitation to be on the trail.

What is your favorite part of doing photography for the race?

Schultz: Well, the beautiful part about being the official photographer is I wrote my own ticket so to speak. I can photograph whatever I want on the trail. And certainly I have responsibilities like photographing all the musher portraits and the winner at the finish line. But for me, the best photography is in between checkpoints; photographing the small dog team on the big landscape. That’s what it’s all about for me. Of course I enjoy photographing the volunteers because everyone is sacrificing their own time and money and talent in order to put this dog race on, so I respect that and I enjoy capturing that basically for the history of it all. One of the official Iditarod artists, Bill Devine, told me, “You’re photographing history Jeff, and you know 20, 30, 50 years or whatever, people are going to look back on this and show what’s more important.” That’s kind of why I’m doing the “Faces of Iditarod” project, is that history is actually more important than what I love to do, and that’s the small dog team on a big landscape. 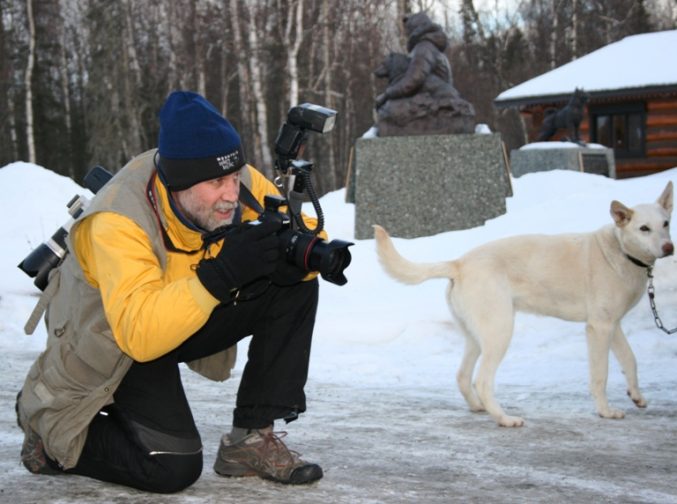 But just like you, I’m a volunteer, I don’t get paid. For the longest time it cost several thousands of dollars for me to put film and and processing, and for somebody in Anchorage to log all that stuff in. So just like the pilots who are donating their $200,000 airplane, and all the hours; that’s what I love about this. The volunteers… most of them don’t care who wins, they’re just out there, like me, to help get dog teams to Nome, be a part of an adventure, and be a part of something bigger than themselves.

What keeps you coming back every single year?

Schultz: It’s bigger than myself. I just want to be a part of this adventure; it’s history. I’m a history buff and many people say that the Iditarod was made to commemorate the 1925 Diphtheria Serum Run, but that’s not accurate. That’s not why Joe did it. He did it to bring back sled dogs. For me that’s what it’s all about. It’s keeping the old ways alive, that’s what I love. So that’s what keeps me coming back.

Is there one specific moment or event from the trail that sticks out in your mind?

Schultz: Well, you can imagine, after 40 years… The beautiful thing is I get to experience 22 checkpoints, so it’s the beauty, there’s so many rich opportunities out there. To start, I had a life or death plane crash on Iditarod, so that would stand out. That’s a “Reader’s Digest” story in itself. But back to what I mentioned earlier, my best experiences are sitting at the summit of Rainy Pass [or any other checkpoint], with a snow machine driver/guide, who’s there helping me and just shooting the breeze and waiting for that small dog team on the landscape to appear. That’s one aspect that I really love and there’s many of those because I’ve done it a number of times. Then the other is, especially the old days, when it wasn’t such a race to Nome so to speak. So sitting around a kitchen table with Joe Redington on one side, Joe Delia, the checker at Skwentna on the other and Herbie Nayokpuk and all these top mushers, and Rick Swenson and they’re just talking about dogs. Just talking about a dog they had 10 years ago and how it did so well, and what the trail was like last night. It’s just sitting around and absorbing all those great memories that these other people have of the race.

You can check out Jeff’s amazing work at his website: https://www.schultzphoto.com/

Unfortunately, I was unable to come up with, or find a lesson about photography. So here are a couple of lesson ideas that can be incorporated into your classroom that, much like Jeff’s work, are based on the visual (and performing) arts! And it is based on Jon Van Zyle, Iditarod artist and partner for their project https://doublevisionalaska.com/

Check out this lesson on how to draw a musher, sled and husky – and a song to go along with it!