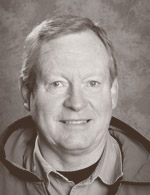 James Warren, 61, born in Michigan, is a retired engineer and a Christmas tree farmer in his home state. He says his family has always enjoyed winter sports together and while visiting Tundra Outfitters in Mackinaw City, they took advantage of an Iditarod tour special. The group followed the 2000 Iditarod and after following the race from Anchorage to Nome, Jim says, “I was hooked.” Jim’s wife, Jennifer, son Christopher, 19 and daughter Whitney, 15 also mush. They have 38 Alaskan Huskies, nine of which are puppies they raised. They purchased their first dogs from Jeff King and then added dogs from Linwood Fiedler and Robert Shaw. Jim also has fifteen years of PRO Rally racing on forest roads. However, he feels that dogs are much more friendly than racecars between events. Jim is also a volunteer firefighter and a pilot. This past year, he and Christopher co-authored a book, Following My Father’s Dreams, Journals from a Rookie Iditarod Run.