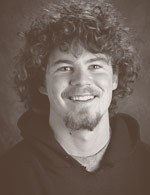 Jeff Wells, 21, was born and raised in Minnesota. He says, “Ever since reading Gary Paulsen’s books and watching “Iron Will,” my dream has been to run the Iditarod.” He lived in farm country in Minnesota and was limited there to sprint dogs. But he compiled his own team and raced competitively during high school. He sold that team before coming to Alaska in 2003 following high school graduation to handle for Jeff King. He is now attending UAF with a major in Wildlife Biology and expects to graduate in 2009. He is taking this year off to run Jeff’s puppy team in the 2007 Iditarod. “After this adventure is finished, my plan is to complete school, although who knows what other distractions may present themselves. Jeff says in his spare time he enjoys hunting, fishing, soccer, bird watching, and playing guitar.