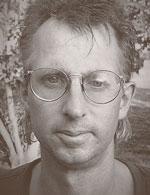 Donald Smidt, 39, was born in Iowa. He was raised in Rice Lake, Wisconsin on a dairy farm. He majored in Dairy at the University in Madison, Wisconsin, and has since managed large dairy farms. He met his partner Denise Cwiok of Howl ‘n Wind in 1994 and began exhibiting AKC Registered Siberian Huskies, showing many of them to title. As he looked for more adventure, he began mushing and started with skijoring and then moved on to running sprint races. Wanting still more excitement he expanded to mid and long distance racing. He has mushed in Newfoundland from St. John’s to Port Aux Basques and back again, 1083 miles along the Ghost Train run in hopes of creating this new long distance run. He says it’s been his dream to run Iditarod and with the support of Denise and also of Carol Dixon of Troika Kennels, his dream has now become a reality. He enjoys his five year old son, Christopher, who is becoming “a great dog handler.” In his spare time, he back packs, hikes, skies, camps and rides horses. He is a member of the Wisconsin Trail blazers, ISDRA and Snow Rovers.