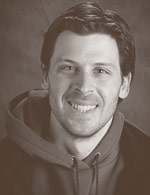 Hernan Maquieira, 31, started mushing in 1994, after finishing high school in Buenos Aires, Argentina. He moved to Ushuaia, Tierra del Fuego, where his Uncle Pedro “el gato” Curuchet (2001 Iditarod musher)had 60 sled dogs. He worked until 2001 doing tourist trips and ran the local Ushuaia Sled Dog Race 3 times. Between 1997 and 2000, he got his Sport Teacher degree in Buenos Aires and since 2002 he has lived in Switzerland with his wife, Vanessa. Hernan and his wife spent February 2003 and April 2005 winter seasons in Chatham, Michigan with Lloyd Gilbertson, to learn the professional part of sled dogs. In January 2005, he ran his first big race, the Attaboy 300, finishing 2nd, and then the IPSSSDR, which he won. Last year, he was in Willow, Alaska, working for the Italian musher Fabrizio Lovati. “When I started with sled dogs, my dream was to run the Iditarod once in my life and I am really close to completing my dream of life.” Hernan will be running Fabrizio’s young puppy team and his goal is to arrive in Nome with as many dogs as possible and spend a beautiful time on the trail. Right now, he is living in Geneva, Switzerland and is working as a swimming teacher. He and his wife have a sled dog called Tweety and she is their skijoring partner. Hernan said, “I will be representing Ushuaia, Argentina in the 2007 Iditarod.”