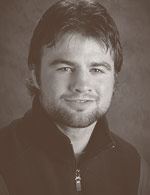 Matt Anderson, 26, was born and raised in Iowa and received his B.S. degree at the University of Iowa. He says he has been training and competing in one way or another all of his live. “After finishing wrestling for the U of I, I was looking for adventure and another competition. I knew very little about sled dogs and Iditarod when I showed up on Doug Swingley’s door step in the fall of 2003.” Plans for running the Iditarod snow balled from that point forward. He began mushing in 2004 and says he thinks his father was the first person to put the Iditarod into his mind. His U of I wrestling coach “fueled the fire to run Iditarod.” He moved to Pindale, Wyoming, “for the cold, snow and mountains” in 2005. His ’07 team will be young with a few older leaders out of Swingley, Saunderson, Karen Land and Osmar bloodlines. “I entered the 2007 Iditarod challenge myself and my dogs and to learn how to compete in this race.” Matt has been a Planning & Environmental Coordinator for the BLM for the last two years. He lists his hobbies as training and competing.