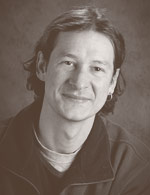 Aleksandar “Sasha” Nikolich, 34, was born and raised in Belgrade, SERBIA, where he still makes his home. For the last two and a half years, he has been a field officer for the Humanitarian Organization. He began mushing in 1991. His interest in the Iditarod quickly followed after he read books about the Race. He says that Belgrade is a city of two million people and he “feels lousy” there but when he is outside for long runs, then he feels “real good.” He says he loves dogs and is dedicating his life to them. He says he is involved in a constant search for knowledge and experience about dogs and nature itself. He has run a number of sled dog races in Serbia, Canada and in the United States and finished very well. He went to Lincoln, Montana, in December of 2005 to learn about mushing from Doug Swingley. He had to leave his dogs in Serbia when he went to Montana and says he misses them, but “I have enough fun with Doug Swingley’s young team that I am training now and have been raising since December of 2005. “Sasha” is a member of the Club Polarex Belgrade, GSS – mountain rescue squad in Serbia and the IFSS. And when asked about hobbies, says, “Dogs are more than enough in my life.”