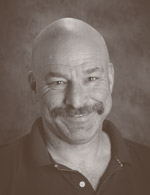 Rob Loveman, 52, has been an outdoors enthusiast for nearly forty years. He started out backpacking as a Boy Scout. Pretty quickly, he became interested in climbing and backcountry skiing. He started pursuing mountain climbing while in high school, rock climbing while in college and backcountry skiing while in graduate school. He continues to pursue each of these today. While in college, Rob found his first Siberian Husky. Or she found him, it's not clear which. Whichever it was, he fell in love with the breed. Mushing was an obvious way to combine outdoor pursuits and time with his dogs. He started in 1999 by skijoring with the two show stock Siberians he then owned. He raced as a skijorer in 2000, 2001 and 2002. He did a little sprint sled racing in 2003 and 2004. More recently, Rob has done both mid-distance races as well as Montana's Race to the Sky, an Iditarod qualifier. Rob now owns 21 racing stock purebred Siberians as well as the two show stock wimps with which he started this sport. His 2009 Iditarod team will be drawn from his small kennel. His racing dogs are mostly from Bob Chlupach/Rick Outwin's Chlout-Velikaya Kennel. He also has a few racing dogs from Karen Yeargain's Tumnatki kennel. Rob Loveman is a 52 year old nuclear physicist having earned his B.S. from Caltech and his Ph.D. from the University of Washington. In addition to mushing, physics, climbing, and skiing, Rob enjoys Taekwondo which he has been studying since 1979. At this time, Rob is hoping to make a career by writing about his misadventures with all of these. Rob is dedicating his run of the 2009 Iditarod to Jacques Porter and Rob Tobin. Their spirit is a continuing inspiration to Rob.