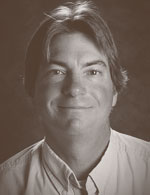 Kurt Reich, 48, was born in Wisconsin and was raised in Memphis, Tennessee. While in Memphis, he studied computer engineering and accounting at the State Technical Institute. He moved his family from Memphis to Colorado in 1994 because of his "love for the mountains." After spending 25 years as a computer engineer and executive, Kurt retired in 2004 to stay home and raise his two children, Robert, now 15 and Lauren, now 12. He began mushing seven years ago with pure bred Siberians but now uses Alaskan Huskies. He "ran the Iditarod" on a snow machine in front of the mushers in 2005. In 2009, he scratched at Don's cabin, due to "rookie mistakes." He will be running the Iditarod to raise money for several charities, mostly children's. He is a professional breeder of Siberian Huskies and owner of Black Diamond Sled Dogs of Colorado. He is a member of the Mountain View Methodist Church and says he is an ex-skydiver and ex-GS ski racer and now skies, is a youth soccer coach and Sunday School teacher and enjoys hunting and fishing. His wife of 22 years Lisa, is a Business Principal for FedEx.