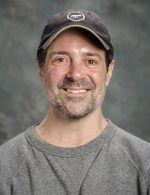 Scott White, 53, was born in Buffalo, New York. He graduated from State University of New York at Buffalo in 1986 with degrees in Philosophy and Design. In 1989, he left New York, looking for a place where he could enjoy the culture of a city and the adventure of the outdoors at the same time and ended up in Washington “to be in the mountains and wilderness.” For the last 20 years a general contractor for Krekow Jennings, Scott says that most of his free time has been spent outside — camping, hiking, backpacking, skiing, sailing, mountain biking and even playing hockey. But he says, “There are few connections with the outdoors as strong as when running dogs. The connection with a team of competitive sled dogs is like no other, and that intense relationship amplifies the connection to the wilderness. That is why I run dogs. Plus the fact that all my childhood, I wanted a dog and my mother never would let me have one.” For the last 20 years, Scott has spent most of time, when not working, training and racing sled dogs in the winter and traveling or sailing in the summer. “My dogs are all Mark Stamm bloodline. Mark and I have been training ‘side-by-side’ for 13 of my 20 years mushing. This year, though, we will be training and racing one team made up of the best of all our dogs. Running across 1,000 miles of Alaska by dog team is one of the most invigorating, profound, and enlightening things one can do and I’ve been trying to get back to the Iditarod ever since my 2010 finish. Finally, the pieces are in place to be able to do it. I definitely hope to compete this Iditarod better than I did last time, but the primary goal will be doing the best I can for the dogs, as it always is.” Scott is married to Francesca Letterly and lists his hobbies as traveling and sailing.