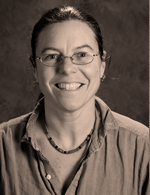 Tamara Rose, 48, was born in Washington and spent most of her life in Northern California. She did her undergraduate work at Humboldt State University, and her graduate work and doctorate of veterinary medicine at UC Davis. After working in west Marin County as a large animal veterinarian, she moved to Alaska in 2004 for “adventure and quiet space.” Tamara began mushing in 2005, has a small kennel of 22 dogs, and has run many mid-distance races. She also completed the 2010 Iditarod and the 2011 Yukon Quest. This year her team will be made up of her veteran dogs and yearlings, both from her kennel and that of Judy Currier’s. Tamara currently has her own solo mixed animal practice and is part owner of a bakery in Fairbanks, Alaska. Besides working, her hobbies are trail running, cycling, and homestead farming.