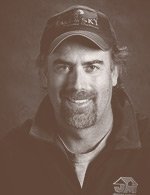 Chris Adkins, 41, and was raised in Alaska, Idaho, Minnesota, Wyoming, Arizona and Montana (son of Iditarod veteran Terry Adkins who moved around with the USAF.) He's been in Sand Coulee since he started high school. He attended Montana State University, studying Fish and Wildlife Management. For the last 12 years, he has been a lumberyard foreman. He began mushing when he was four and says he has wanted to try the Iditarod "forever." He's been mushing in Montana and has run the Race to the Sky numerous times. He received the Sportsmanship Award in the Race to the Sky a couple of times. Chris is the father of three, Cotter, 18, Jeff, 17 and Katrina, 10. He says he enjoys hunting, horses and stock car racing.