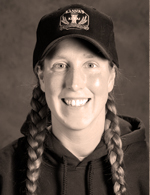 Colleen Robertia, 35, was born and in Pennsylvania and raised in Massachusetts. She received her B.S. degree in 1998 in New York, with a major in Environmental Biology and a minor in African Studies. She then worked as a zookeeper caring for threatened and endangered species of large hoof stock (elephants, rhinos, giraffe, antelope) and big cats (lions, leopards, jaguars and cheetahs) in Georgia for the Wildlife Conservation Society and then for the Jacksonville Zoo in Florida. She says, “We quit our jobs at the zoo to thru-hike the 2,168 mile Appalachian Trail from Georgia to Maine. It was a period of deep introspection. We figured out what was important to us in life and moved to Alaska in 2002. She says “I’ve always enjoyed wildlife, wild places, and wild people. Alaska offered all three so I moved here!”

For the last nine years, she has worked as a counselor for emotionally disturbed youth. “Since I started mushing, I’ve made it my goal to prove that year-round excellent treatment, diet and veterinary care are the hallmarks of success for anyone working with not just sled dogs, but all dogs. I’m a veteran of the two toughest and – at 1,000 miles each – longest sled dog races in the world: the Iditarod and Yukon Quest. I’ve also competed in dozens of 200-300—mid-distance races around the state of Alaska, earning first place finishes in several of them, including most recently the 2010 Gin Gin 200. In addition I was presented with the Humanitarian Award by the race veterinarians and judges for my excellent dog care. I am a four-time recipient of this award from various races, and over the years have also received awards for “Sportsmanship” and “Spirit” of tough self-reliance. I take pride in my accomplishments since not only do I train my dogs while maintaining a year-round full-time job, but I also run dogs taken in from animal shelters or given to me by other mushers after not working out in their kennels for various reasons. In the summer, I free run my dogs on the beach, hike with them in the mountains and swim with them in nearby ponds. In winter I develop and adhere to a rigorous conditioning and training regime to transform seemingly ordinary dogs into canine athletes of the highest caliber. All the dogs in my kennel have a home for their whole life, and I work hard to better the understanding of sled dog care, including most recently taking part in a comprehensive study of Alaskan huskies with congenital laryngeal paralysis (a.k.a. wheezer disease). Working closely with veterinarians I provided information to pedigree analyses, DNA samples from my dogs for genetic investigations, and allowed two of my dogs to receive corrective throat surgery, one of which will be in training for this Iditarod as a result of the procedure. Annually I strive to prove that it is hard work, perseverance and canine compassion that are a winning combination. I’m hoping to continue spreading my humanitarian message by further improving my success with my dogs during the 2011-2012 racing season, and I welcome any financial or in-kind support.”