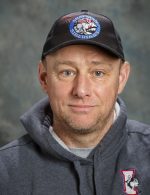 Rob Cooke, 51, was born and raised in Worcester, England. He received his B.A. and M.A. in Humanities in the United Kingdom. “Having spent 23 years in the UK Royal Navy as an aircraft technician and then as an engineering officer, I retired in 2005 to live in Canada and pursue the dream of racing the Yukon Quest with our own Siberian Huskies. In 2013, we realized that dream when we crossed the finish line in Fairbanks. This just inspired us for more, so in 2015, we entered both the Yukon Quest and the Iditarod and became the first purebred team to finish both 1000 mile races in the same winter. Wanting to prove it wasn’t all just luck, we repeated the feat in 2016. We have a kennel of AKK, CKC, and UKKC registered Siberian Huskies. One liter, the Crazies, between them have finished 23 1000 mile races.” Rob is a member of the Siberian Husky Club of Great Britain and is married to Louise. He says he has “no” hobbies!