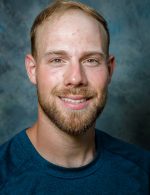 Born and raised on the East Coast, Tim, 30, moved to Wyoming in his late teens where he spent ten seasons guiding hunters and trips in the wilderness. During this time he also attended the University of Wyoming, worked as a ski patroller, and apprenticed under Iditarod finisher Billy Snodgrass. Tim then moved to Alaska where he spent six seasons in the southeastern part of the state mushing and managing dog camps and spent his winters in Big Lake, apprenticing under four time champion Martin Buser

When Tim isn’t training for the Iditarod or giving Alaska’s best dog tours at Buser’s Happy Trails Kennels, he can be found traveling Alaska, hunting, fishing, berry picking, ripping the banjo, taking jaunts on mountain ridges, canoeing and swimming in lakes—and in the evenings he can be found sipping fine rye whiskey on the rocks.
He lives and works at Happy Trails and is racing a team from the kennel this year.