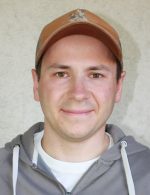 Fabio Berlusconi, 34, was born and raised in the Lake Como area on northern Italy. He has a Master’s degree in Foreign Languages and Translation from the University of Milan. Fabio has been mushing since 2011, when he moved to Kiruna, Sweden, and started handling and guiding tours for Iditarod veteran, Mats Pettersson. In the following years he began racing in Scandinavia, and in 2018 he decided to focus on running the Iditarod. He has spent the last two winters in Willow and ran his qualifiers with Iditarod Champion Joar Leifseth Ulsom’s dogs in 2019. This year, he expects to show up at the start line with a team from Linwood Fiedler’s Wayfinder Kennel. In the summertime, Fabio works as a fly fishing guide, which is his other great passion besides dogs; he also loves mountain biking, hiking, and music. He plays guitar and has been a professional musician. Fabio is a member of the Torne River Sleddog Club.