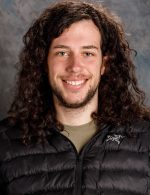 Twenty-nine-year-old Sean Underwood was born and raised in Atlanta, GA and graduated from Georgia Southern University. The year after he finished college, he spent most of his time in Central and South America achieving fluency in Spanish through cultural immersion and getting to know his relatives throughout Chile. Sean came to Alaska in 2015 to stay with his Aunt, Uncle, and cousin, and commercial fish for sockeye salmon with them on Kodiak Island. After spending two consecutive summers living off the grid and eating delicious fish in the beautiful country, he was interested in trying out a winter in Alaska. His Aunt and Uncle put him in touch with their friend Jeff King, and Sean was hired to be part of the Husky Homestead crew in the fall of 2016. He now lives and trains in Talkeetna, Alaska.
Sean’s race history includes the 2016 Alpine Creek Excursions Race, 2017 Tustumena 200, 2018 Copper Basin 300, 2020 Yukon Quest 300, and the 2020 Goose Bay 150 Dog Sled Race.