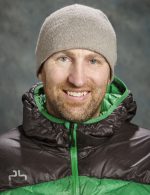 Kelly Maixner, 44, was born and raised in North Dakota. After graduating from Montana State University he went to dental school at Nova Southeastern in Ft. Lauderdale, where he received his dental degree. Kelly moved to Alaska in 2007 for a pediatric dental residency. Being a man who always seeks out challenges, he immediately set his sights on running the Iditarod. He started Mad Stork Kennel, LLC with two pregnant females and it has grown to around 60. Before Kelly decided to become a pediatric dentist, he was a farmer, a snowboard instructor, a soldier in the National Guard, a bartender, a doughnut-maker, a physical therapy assistant for the Phoenix Suns, a state champion boxer, and a semi-professional football player for the Bozeman Kodiaks. An avid runner and competitor, Kelly has completed multiple marathons and triathlons, including the Silverman competition. He hopes one year to finish the Iditarod, climb Mt. McKinley, and race the Boston Marathon. Every year Kelly takes his professional skills to Haiti to provide dental care for the children of Kobonal Mission. Kelly’s wife, Margaret, found him in 2009 and they were married the following year. They are the parents of Rosemary, 7, and Ven, 6, Birdie, 4, and Lulu, 2, and new born Shane. He is a member of the American Dental Association and the America Academy of Pediatric Dentistry.