Dog of the Month- Orchid!

Today we hear from Cindy Gallea about her special dog Orchid.  Cindy is not mushing this year however she has run in 15 Iditarods. Her first Iditarod was in 1998 finishing in 48th place with a time of 14 days 0 hours 48 minutes and 36 seconds.

“Orchid joined my kennel when she was about one year old.  It was my good fortune that she became my dog.  In early 2008, I bought a dog from Jason and Harmony Baron.  At the time, they had more young females than they needed or wanted in their kennel.  Orchid’s breeding was similar to the dog I had purchased, so Jason and Harmony gave her to me as part of the deal.  Orchid immediately got my attention.  She was a petite, but athletic and powerful dog.  She had an engaging and commanding presence.  She had the intuitive awareness as well as confidence that made me sure she would become a great lead dog.  So I worked with her in the team and in lead.  The only trait that she had that slowed her taking hold in lead was her tendency to intimidate her co-leader.  She loved to tease, to bark in the other dog’s face.  Dogs twice her size were intimidated.  In spite of this trait interfering with her learning to be a leader, it was hard not to smile at her feistiness!     That first winter, she ran with Sue Morgan’s young team in Iditarod.  She wasn’t a great eater and ended up getting dropped because she wasn’t holding her weight.  She continued to show promise, but in the 2009 Iditarod, I had to drop her in Kaltag because she wasn’t keeping her weight.  Although I didn’t want to spay her given the potential I saw in her, I felt spaying her would give hera chance of holding her weight so she could perform to her potential.  I spayed her in the summer of 2009, and in the winter of 2009-2010, she began to perform to her potential.  She led the team to Nome, along with a much bigger dog, Hammer.  Orchid still liked to tease her running mate, but the bigger dogs handled her feistiness more easily and weren’t intimidated.  Orchid was, indeed, “bigger than her body gave her credit for.”   In the off-season, Orchid engaged anyone who came to visit the kennel.  People were always very drawn to her.  When she had free playtime in the yard, she visited all of the other dogs.  They had a great time playing with her, but they always treated her as the one “in charge.” 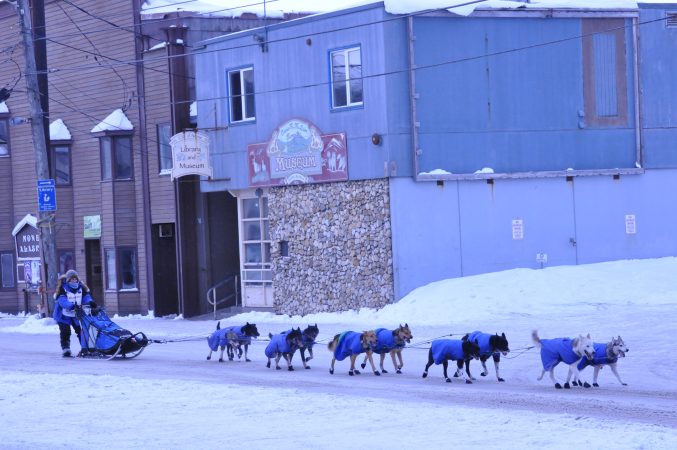 Orchid in lead on the right: Photo Credits Cindy Gallea

I sat out Iditarod 2011 and 2012.  When I returned to Iditarod in 2013, it was Orchid’s presence on the team that gave me confidence that we could again make it to Nome.   She never hesitated, dealing with overflow, drifted trails, and white-out between Safety and Nome.  She again led the team in 2014, 2015, and 2016.  With her in lead, I always knew we would get to Nome.  She always seemed to know what was needed.  (In 2014, I was ill from the start of the race and had to scratch in Skwentna.   Orchid didn’t have a chance to show how she would have handled the trail that year.)   She was almost 10 years old in the 2016 Iditarod, but her spunk and drive belied her age.  I tried to retire from Iditarod after the 2016 race but just couldn’t do it.  So, I began training for the 2018 race, with Orchid in the team. 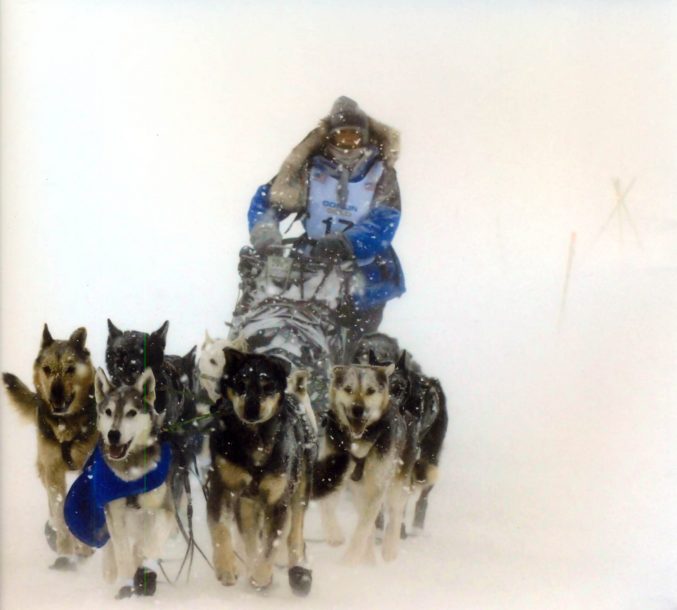 Orchid in lead on the left: Photo Credits Laurent Dick

She was 11 years old, so I knew she might not be able to make the final Iditarod team that year.  In January 2018, she got quite sore in the Gunflint Mail Run race; she slowed down and really couldn’t be in the team at that point.  When we returned home, she let me know she was done racing.  She stayed in her house during team hookup.  When the team would return to the yard, she was out of her house, barking and telling everyone what to do.  So she retired from racing.  It wasn’t always a graceful retirement.  She would be loose in the yard at times when a team would leave the yard on a training run.  When the team would return, she would challenge the team, letting them know she was still in charge.  I didn’t run the Iditarod that year.   The remaining leaders were not yet ready to fill her shoes.

From then on, Orchid was loose in the dog yard, visiting other dogs, playing with other dogs, and always making sure things were in order.  As before, any visitor to the yard was drawn to Orchid, giving her extra attention.   In the summer of 2019, I was away from home for a week.  Two good dog people were taking care of the dogs.  Orchid became quite ill during that time.  They called me, and we talked about how to best manage her frail state.  We gave her the best veterinarian care, but she could not pull through this.  I said good-bye to her by talking to her via cell phone, as my friend held the phone to her ear.  He kindly told me her breathing evened out as I talked with her.  It was so difficult to not be there to care for her, to pet her, and to talk with her as her life passed.   When I returned home a few days later, I was struck by how empty my dog yard of 45 dogs felt.  I am certain the other dogs felt her absence.  I think of Orchid every time that I am with the dogs and often in between. She touched me deeply; I miss her so.  I am sure she is still in charge, teasing and playing with other dogs, still occupying an important place in the universe.”