Paws Along the Trail and Watch Sled Dogs

Spending five weeks in Alaska gave me ample opportunities to observe sled dogs.  I want to answer some questions students often ask and share some of my favorite dog photos from the Iditarod Trail!

Is it hard for the mushers to get the dogs to run?

Mushers tell me that the difficult thing is getting the team to STOP!  The dogs look as though they are smiling when they are pulling and running; that’s what they love to do. 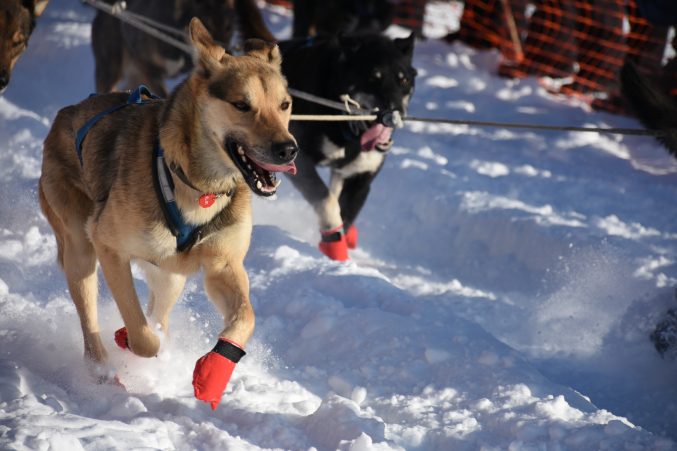 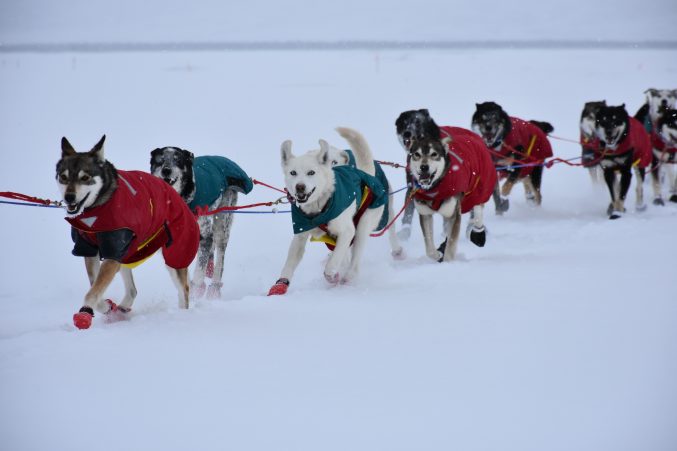 Magnus Kaltenborn’s team rushes along the slough into Unalakleet.

What color are the sled dogs?

They are usually a mix of brown, tan, and black. Some are black and white. Jim Lanier runs his “Northern Whites” team that are all a cream color. It’s amazing to me how mushers know and recognize each of their dogs, even though to an outsider, they look very similar. 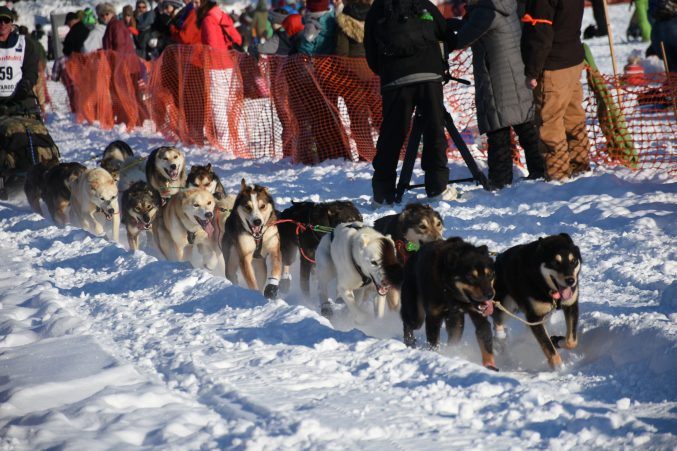 A kaleidoscope of dog colors is found in ‘s Iditarod team! 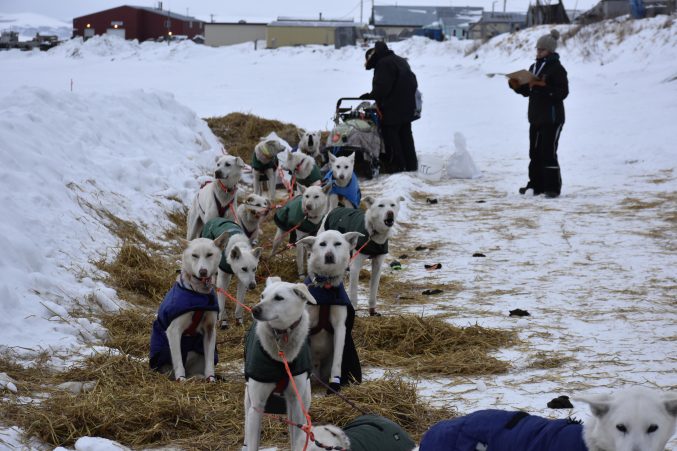 What kind of dogs run the Iditarod?

Most of the mushers have Alaskan Huskies. These are a mixed breed, or mutts. They are part husky along with other breeds such as Border Collie, Setter, and Hound.  The reason Alaskan Huskies are favored by mushers is that they love to run and pull! They also have incredible drive and the endurance for long treks through the Alaskan wilderness.

Which of these sled dogs looks more like a husky? 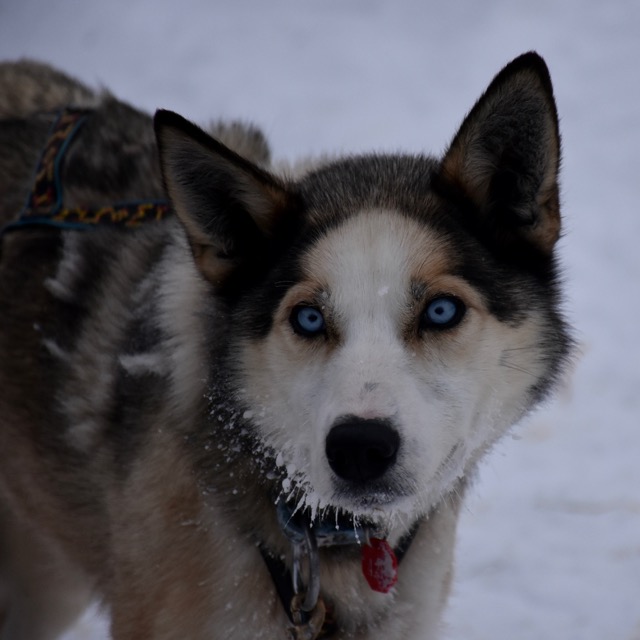 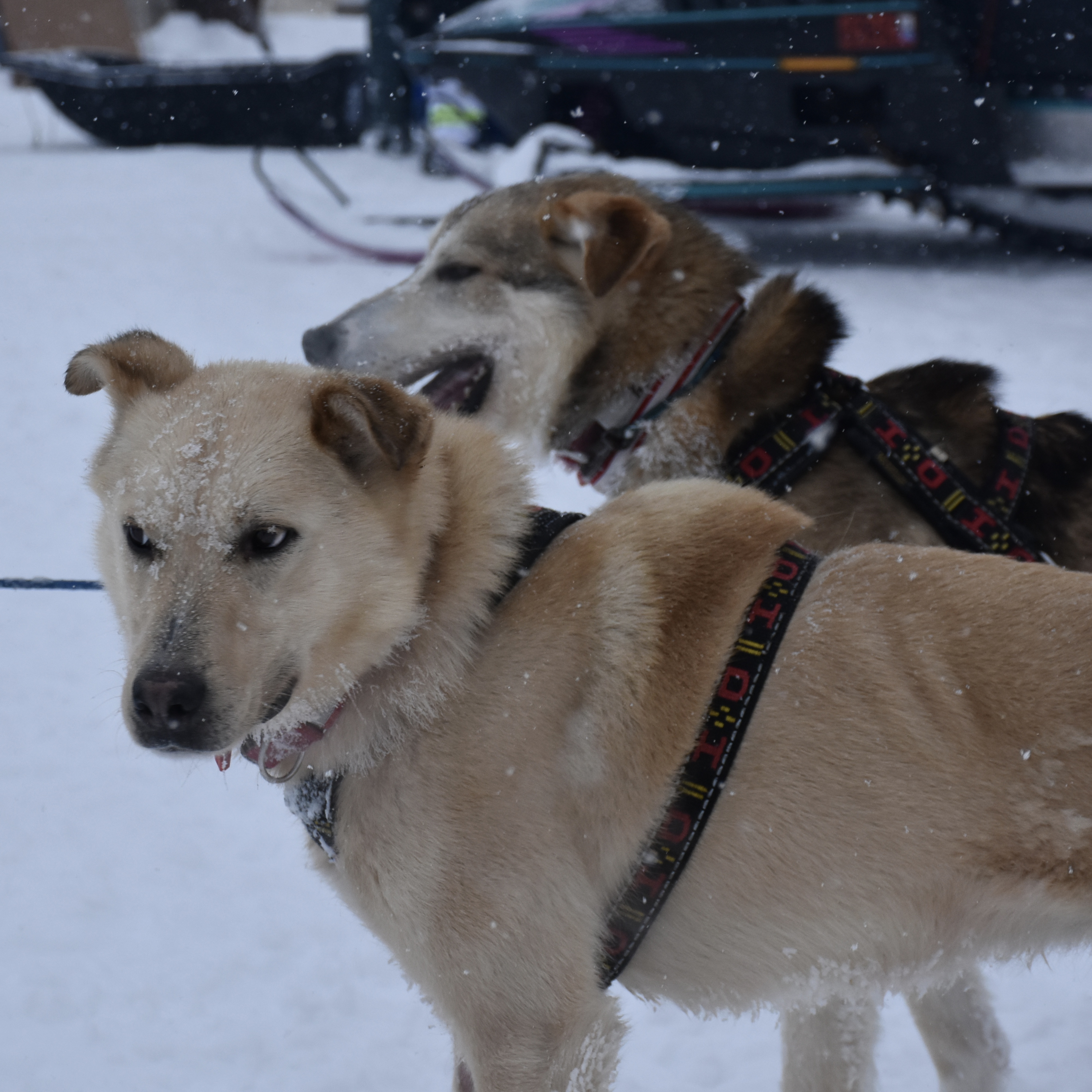 What do the dogs eat?

Mushers carry “snacks” of meat in their sleds. These are often sliced frozen salmon or other meats. High energy kibble, or dry dogfood, is also carried and usually served to the dogs in a soup of warm water which comes from melted snow. 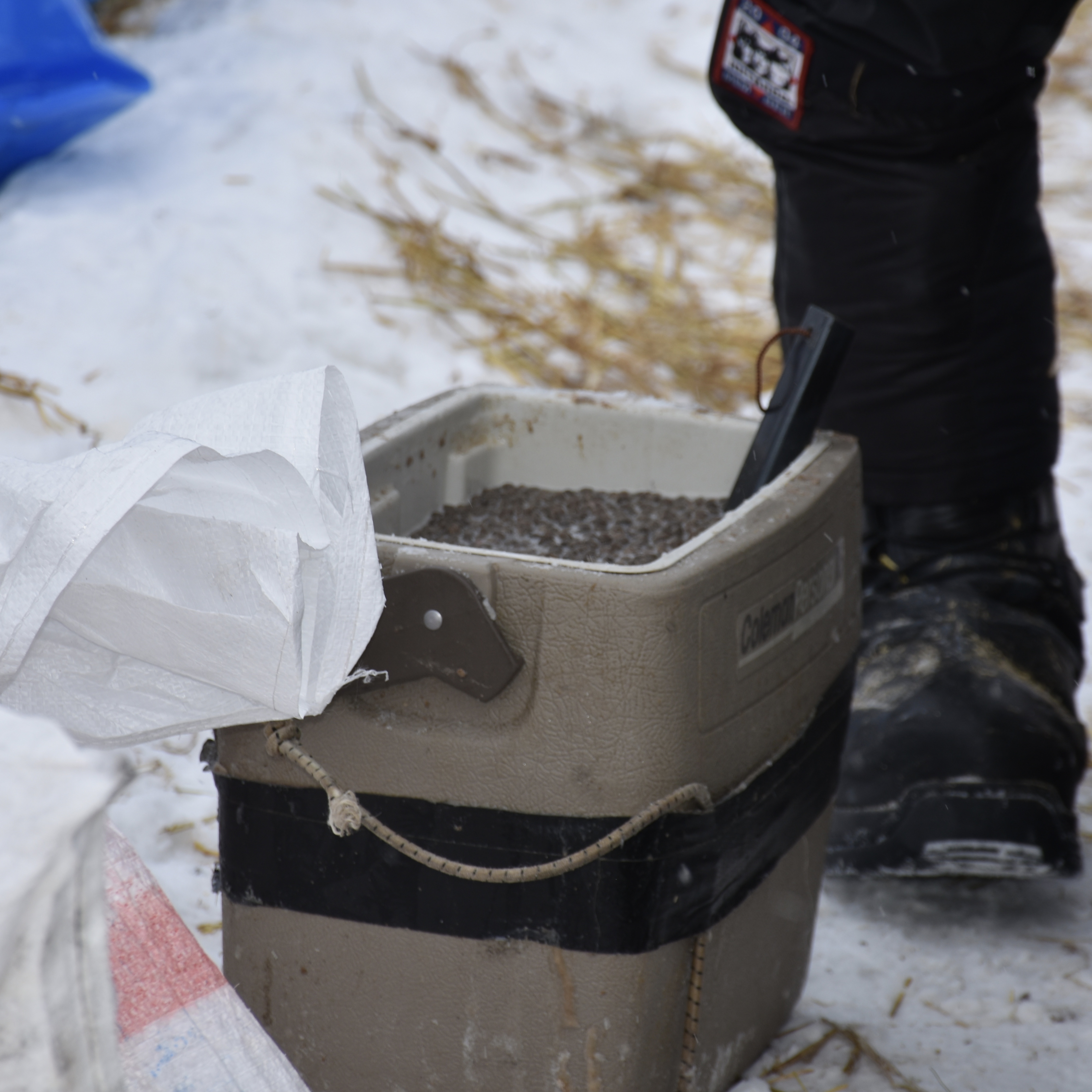 One soup recipe with kibble 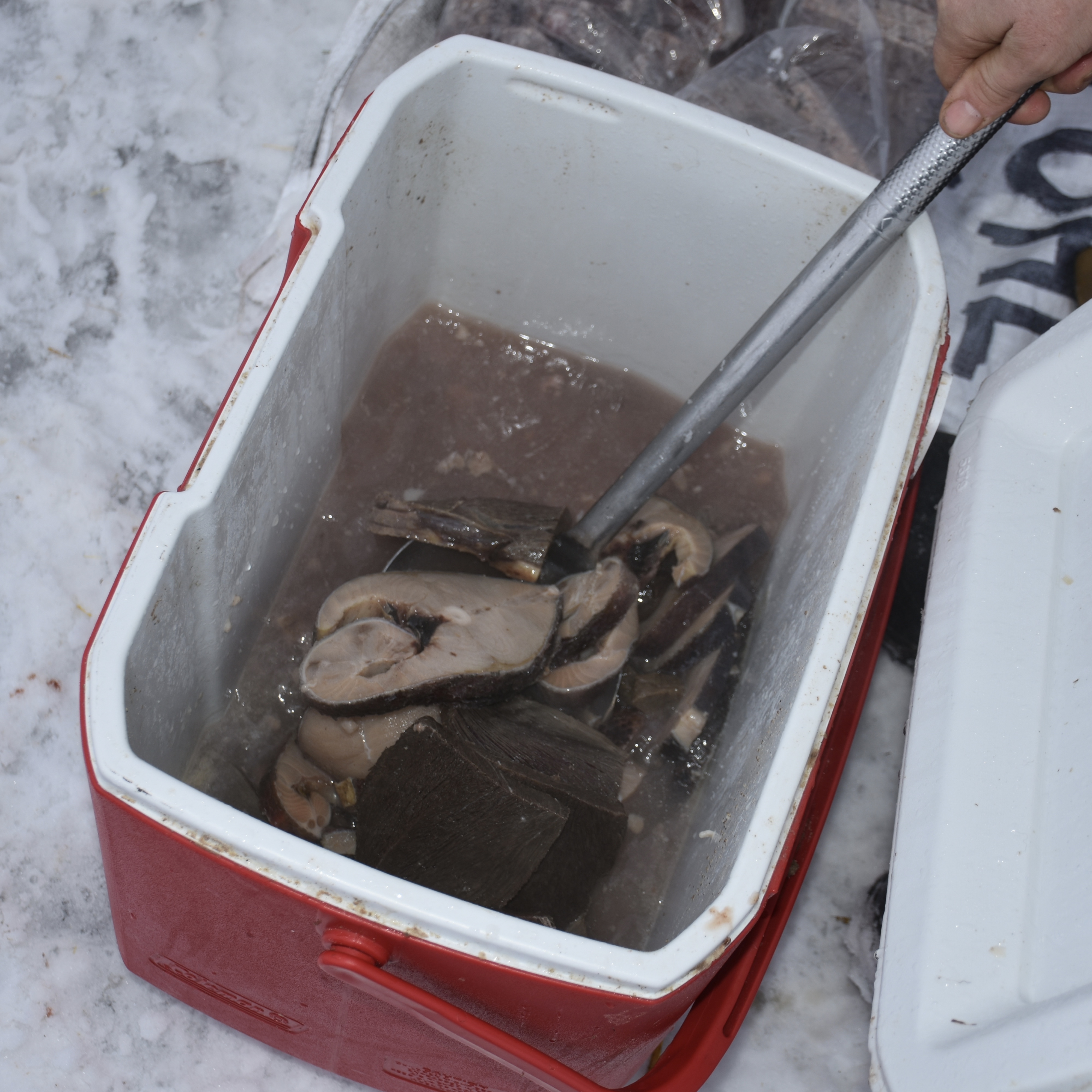 Meat “soup” for the dogs

Do sled dogs get cold?

Sled dogs live outside with doghouses, so are accustomed to snow and cold temperatures; their double coats of hair keep them warm. Usually, dogs prefer to run in temperatures below zero. Overheating is more of a danger than getting too cold. However, in  wind and severe temperatures, mushers carry dog coats that add extra protection for the dogs. 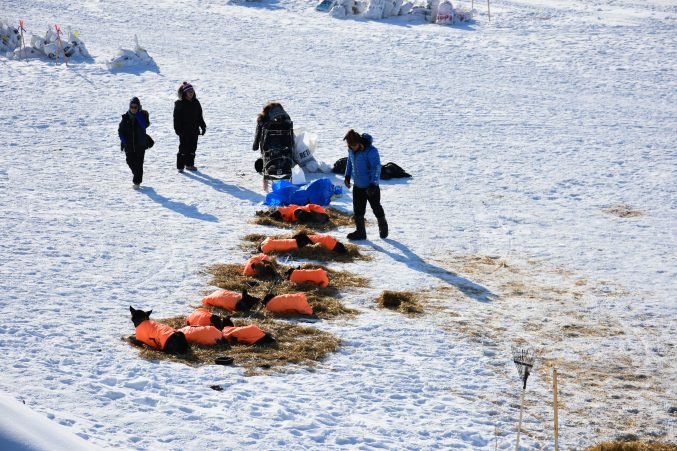 A sled dog’s husky tail is curved to help with warmth. When the dogs curl up on the straw to rest, the tail can wrap over the dog’s mouth and nose, adding warmth. If students try that using an arm to cover mouth and nose, they can get a sense of how that helps. 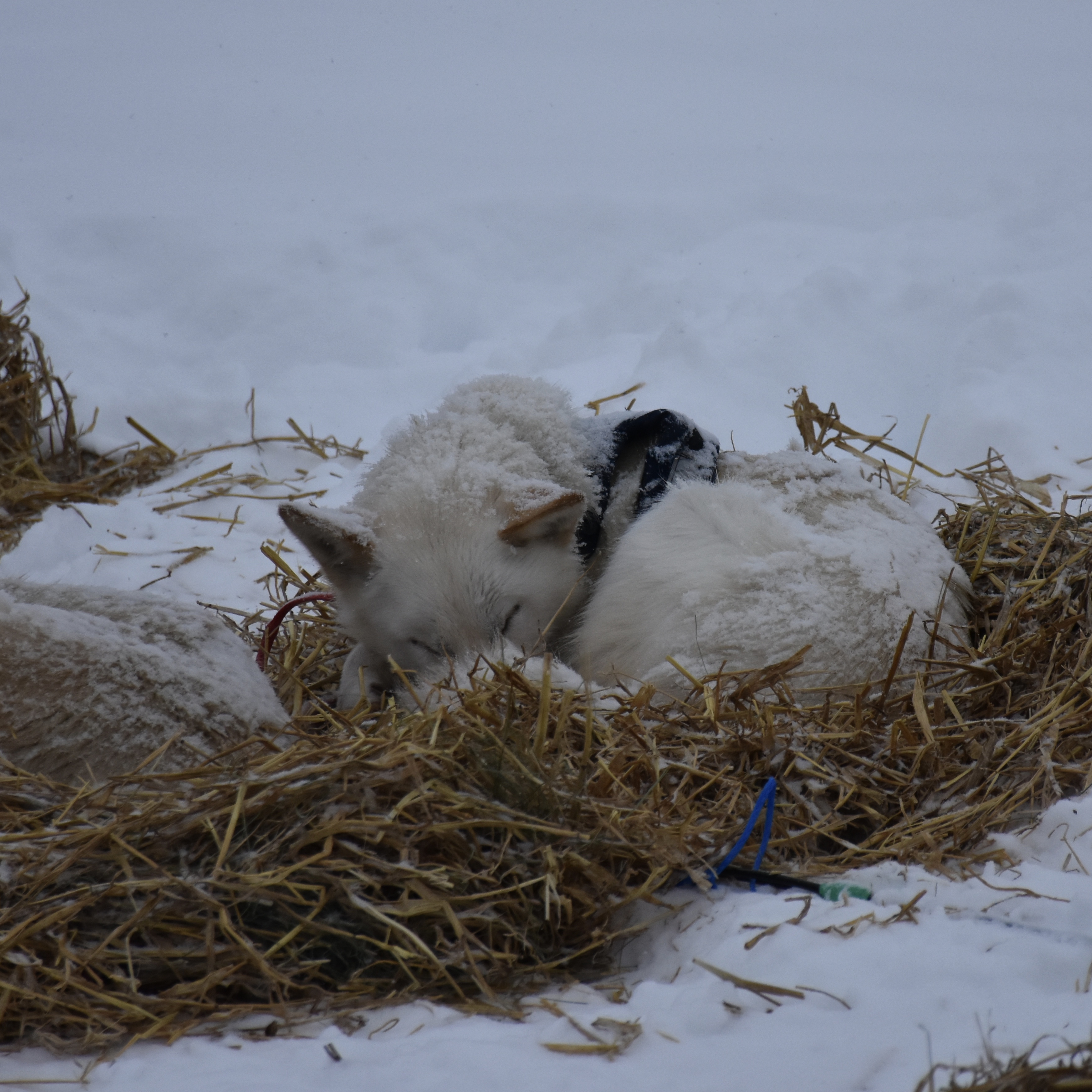 Tail over nose and asleep

Do the dogs get to rest?

Yes! The Iditarod has three mandatory rests for mushers and their teams.

Besides those, mushers have run/rest schedules for their teams. They will run for awhile, then stop and rest along the trail for the same amount of time. Mushers observe their dogs closely and know if they need a break. You will sometimes see a musher carrying a bale of straw out of a checkpoint. Most likely, the musher plans to camp along the trail instead of in a checkpoint. Dogs don’t need to rest on straw, but they like it and enjoy curling up, often with a warm dog-buddy. 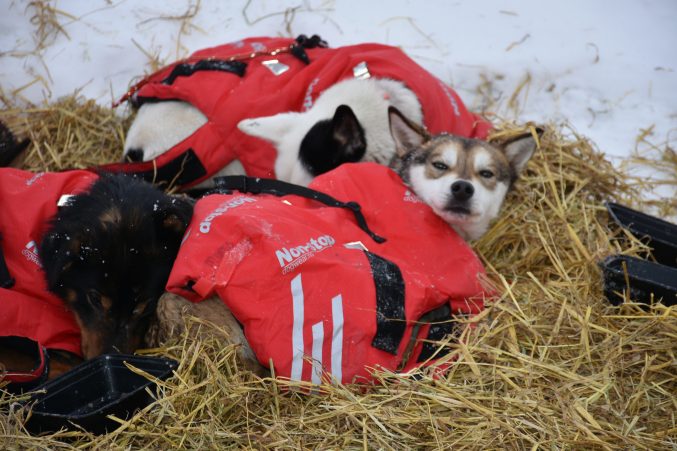 Curled up with dog buddies to rest

Just like neighborhood dogs, it’s always best to ask the musher or owner if it’s OK to pet their dog.  Some sled dogs are shy; most are very friendly.  They love attention like belly rubs, ear and backs scratches, and encouraging words. 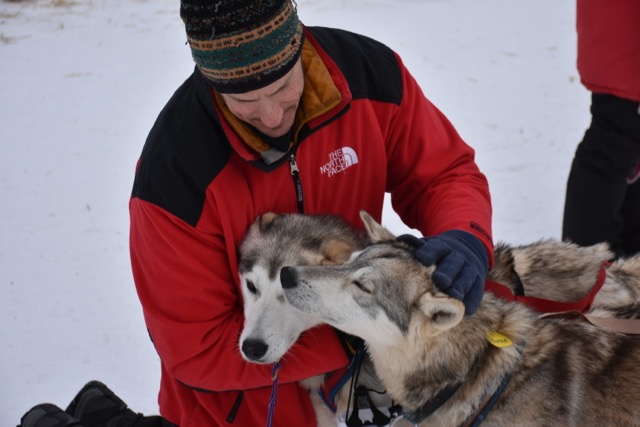 Dogs loving their ear rubs from the volunteer vet 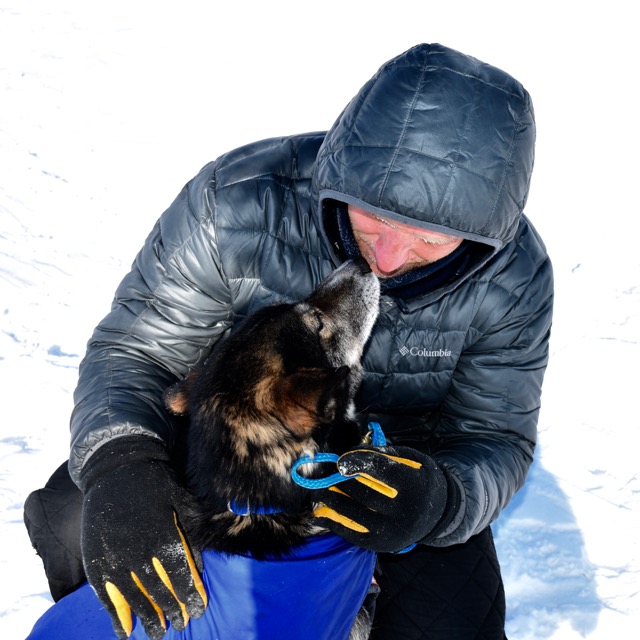 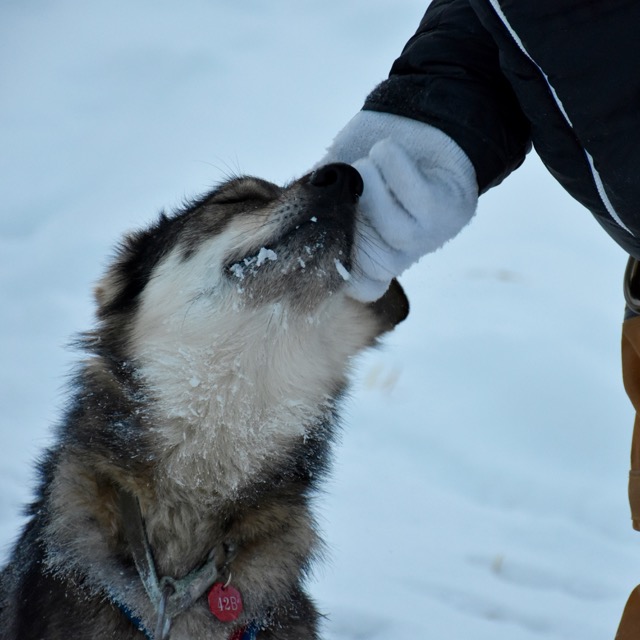 A bond between musher and dog