Misconceptions and More: Why Dogs?

With so much wildlife in Alaska, the question sometimes comes up about ‘Why use dogs and not other animals for work in the Arctic?’ It’s a very good question and one that has quite a complex answer. There have been attempts at using other animals to help humans live in the extreme climate in the Arctic, including reindeer, and even a moose on occasion. Being much larger in stature, and native to the Arctic region, these animals might seem more well suited for assisting humans in their daily tasks and long distance travel. However, dogs continue to be the animal of choice.

According to an article in LiveScience.com, animals that would be best suited for domestication and use by humans usually fall into 6 criteria:

Here is a link to the full article: https://www.livescience.com/33870-domesticated-animals-criteria.html

There are not many Arctic animals that fall within these parameters. The main issue with those that do, is that it is illegal to own, and therefore domesticate them. More specifically, state law bans the keeping of game animals as pets; follow this link to the law. The only place to see these animals besides in the wild are at zoos and other similar facilities. During the days when Alaska was only a territory, domestication of some of these animals was attempted on a few occasions, each with its own challenges. 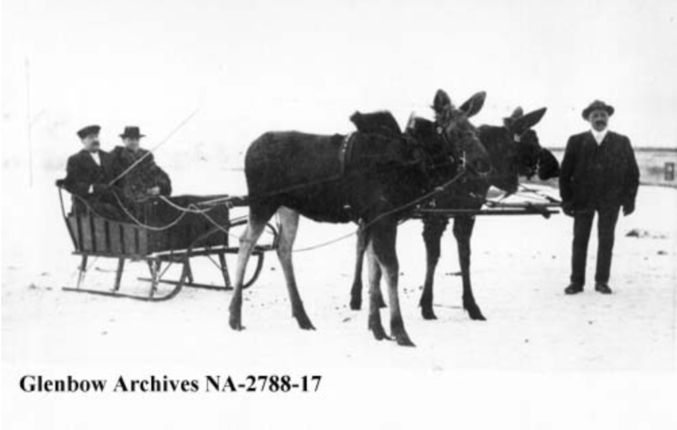 Jack Carr, perhaps the most well known (due to his confirmation of a gold rush in the Klondike area in 1897) captured two young moose calves around 1909, named them Bill and Helen (after then president William Taft and his daughter), and kept them for a few years.

To learn more, click the link to the full article on the topic https://www.adn.com/wildlife/article/moose-and-men-brief-history-domesticated-moose-alaska/2016/01/03/

Bottom line, people thought it was a lot easier to train a horse than a moose. The challenge of acquiring a young moose calf, training it, and then starting the process again with the next calf, was simply too great.

Nils Klemetsen starting with mail for Nome from Eaton; Unalakleet River, March 1, 1900. Klemetsen was part of a group of herders brought to Alaska from Scandinavia in 1898 under contract with the U.S. Government, to teach native Alaskans how to raise reindeer. Courtesy Presbyterian Historical Society, Philadelphia, PA.

Reindeer have the capability of pulling the same amount of weight in a sled, but due to their size and diet, max out at about 50 miles/day. They simply do not have the biological makeup to travel long distances for sustained amounts of time. However, during the warmer seasons, reindeer were used to transport mail from 1899 to the early 1910’s in parts of Alaska. There were a handful of routes that were used in and around the Nome region. This was somewhat successful as reindeer are a grazing animal. Their diet consists of mosses, lichen, herbs, grasses, and the shoots and leaves of shrubs and trees. So food during the warmer months was available on the mail route, which made things easier. Although, during the winter months, these food sources were not readily available, and are much harder to maintain over longer distances, making them less optimal for work and travel.

Currently, there are reindeer farms being used in Alaska today. Here is one such farm in Palmer, AK that also has a moose, bison, yak and elk. https://www.reindeerfarm.com/

As historian and Iditarod great Dan Seavey stated, “There were successful reindeer teams, but I would guess because they were very inconvenient to keep, compared to dogs, they are also not as trainable as dogs, never have been. Not as predictable in behavior. Pound for pound, a dog can pull more than a reindeer. Over a long period of time, dogs prove to be more trustworthy, more economical.” 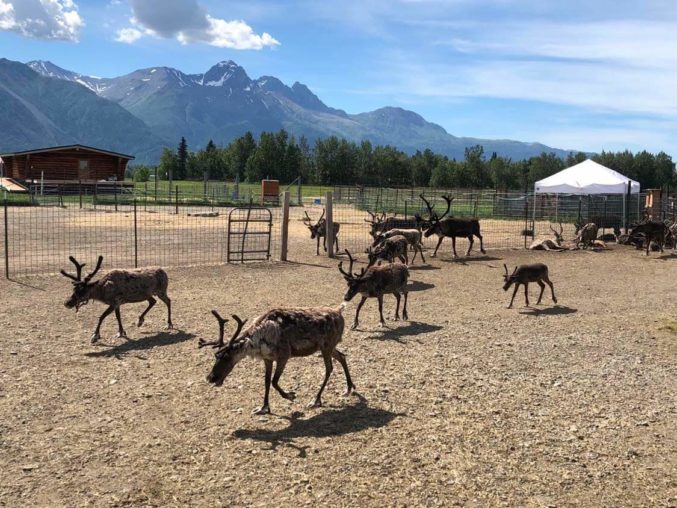 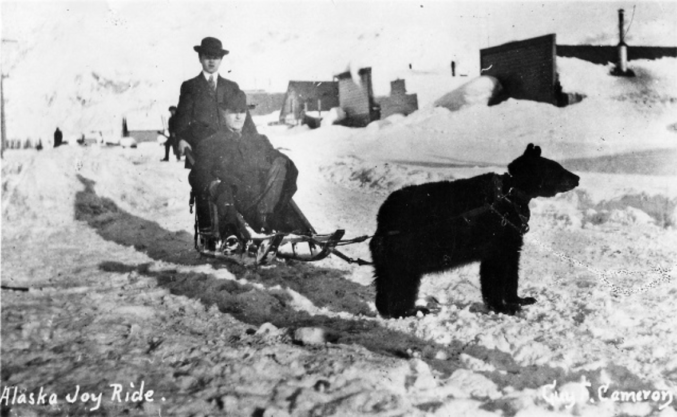 Although this photo appears in the history books, I was unable to find any accounts or information about domestication ever being attempted with bears. For starters, they are not a pack animal. Males tend to live more independently and bears simply do not have the body structure or endurance for long distance pulling. And most significantly, they are far more dangerous. Therefore, this was never a viable option for people living in the arctic region.

The one species that has been successfully used for assisting humans in the Arctic region has been dogs.

Sled dogs have adapted over thousands of years to be well suited for work and survival in extreme environments. During that time, there are numerous adaptations that the sled has developed. These include:

In addition to the adaptations above, the dogs used in long distance endurance races like the Iditarod and the Yukon Quest need to have a very specific genetic disposition. Therefore, the dogs that are selected to race are the result of a very specific breeding program that the mushers have designed. The canine athletes in these races represent the very best the Alaskan Huskies and other breeds have to offer. As Martin Buser told me in an interview last year, “Training is ongoing. When I tell people it starts before utero, they look at me like “what are you talking about”? But because we pick the moms and dads, we selectively breed dogs based on many, many attributes, I call it the 30 attributes. So when the puppies are born they are predisposed to being successful sled dogs based on all that selective breeding.” 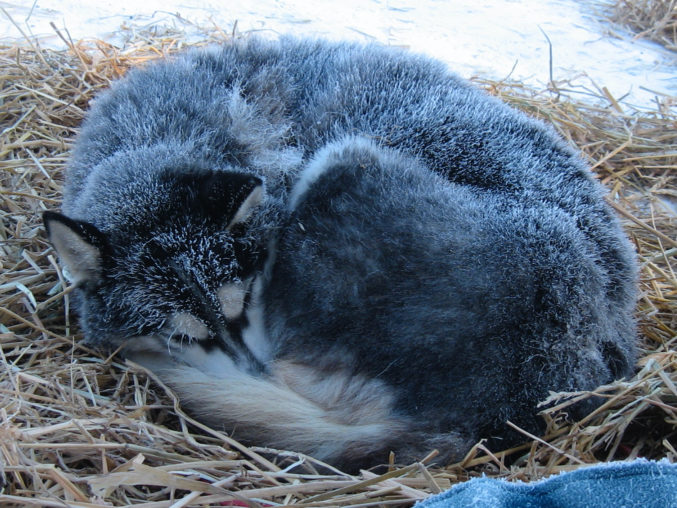 Sled Dogs use their tails to help keep warm. One of their many unique adaptations. Photo Credit: Terrie Hanke

Finally, there is an uncommon bond that exists between humans and dogs that should be mentioned here. There is a reason that dogs have earned the nickname of  “man’s best friend.” The relationship that has been built over the thousands of years of evolutionary existence of both species is extremely powerful. Humans and their canine companions have learned to trust and depend on each other for survival. This simply cannot be discounted. All of these factors considered, the Alaskan sled dog is still the most sensible choice for long distance travel and work in the Arctic region.

To echo the importance of relationships and the reliance of dogs and humans on each other, check out this preview of a recently released dog show titled “Man, Woman, Dog.” Be sure to watch (at least) episode numbers 2 and 4 which star the Berington twins and their dogs at Seeing Double Dog Kennel! https://www.youtube.com/watch?v=RIxaNPS__p0

Teachers: Check out this high school science lesson from 2020 Teacher on the Trail™ Kelly Villar about the sled dogs’ Skeletal system.