Every musher has their own preferences – on just about everything. So when it comes to the clothing they take on the trail, it is no different. I asked some mushers what their most important piece of clothing is, and how it has changed over the years. As technology constantly improves and new materials are introduced, the clothing that the mushers wear during the race changes too. Some mushers have donned more of the traditional clothing first used by Alaska Natives, while others have gone for the latest technologies. Either way, the development has come a long way! Check out some of the responses given by mushers as to their most important piece of clothing and how it has evolved. 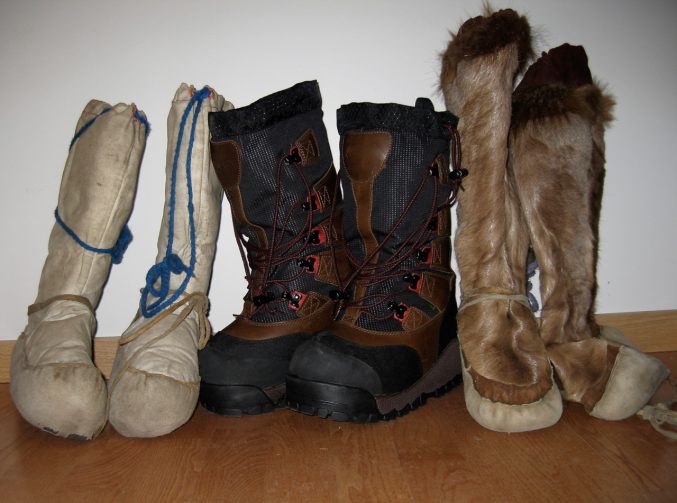 The photo is of Eep Anderson’s boots and my boots, the same boots many mushers wear on the trail today. Photo Credit: Terrie Hanke

“Bunny boots are hard to beat, and there are still some mushers that wear bunny boots. They are hard to come by and I suspect more of them would, (but) they don’t make them any more. They’ve got imitations but not the real old military bunny boots, and you can wear those. You’ve got to learn how to wear them. If you tie them up real tight your feet will perspire and that’s not good, but I’ve always felt if you leave the tops open they work good. But when it really got cold then you put on native mukluks and I don’t think there’s anything that can beat that.

They have manufactured boots now that a lot of the mushers wear, only because bunny boots are difficult to come by. I noticed most of the native people were still wearing mukluks. There are not too many people making them any more; natives making native style mukluks. You can buy footwear today that they might think is adequate, but I don’t think you can beat a native style mukluk. I had a pair of caribou mukluks that I wore for years, and then a handler that I had, she made me a pair with good bottoms on them made of bear hide and they were really warm. But a pair of bunny boots, if you’ve got the original pair of bunny boots, they will do you well out there.”

“It’s kind of hard to pin it down to one, because there are so many items that you need, or you think you need. Besides all of your mandatory gear, and your knife and your axe, I think I would go with my parka. It’s not a mandatory item, but it’s a life saving item obviously because it keeps you warm and it has so many pockets to hold a lot of your gear, and yes it has changed for me. Just like every other outdoor enthusiast, I am always trying to get a better product; something that’s going to fit me better and adapt to the temperature and the climate better. So my first parka that I ever used when I worked with Martin (Buser), he had a sponsor, the Northern Outfitter sponsor, which is a big arctic outerwear clothing company, and they unfortunately are no longer. But they used closed cell foam to keep warm. Coming from Ohio I never really knew about that kind of material to wear in the cold climates. It’s really bulky, it has like a typical outer parka but then your undergarment, your mid-layer would be this really thick piece of foam jacket. It’s bulky, but it keeps you really warm, and allows you to sweat, and it wicks the sweat a little bit away from your body. But its downside is that it’s bulky, its upside it dries out really fast, you can wring it out. It’s pretty comfortable, so I used that for a couple of years. 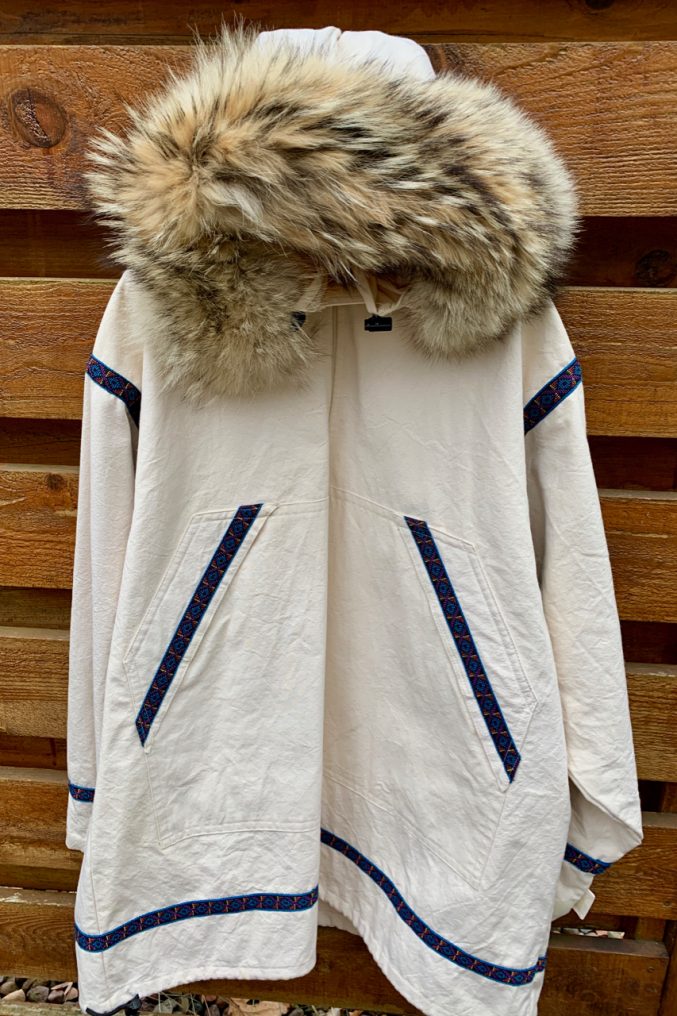 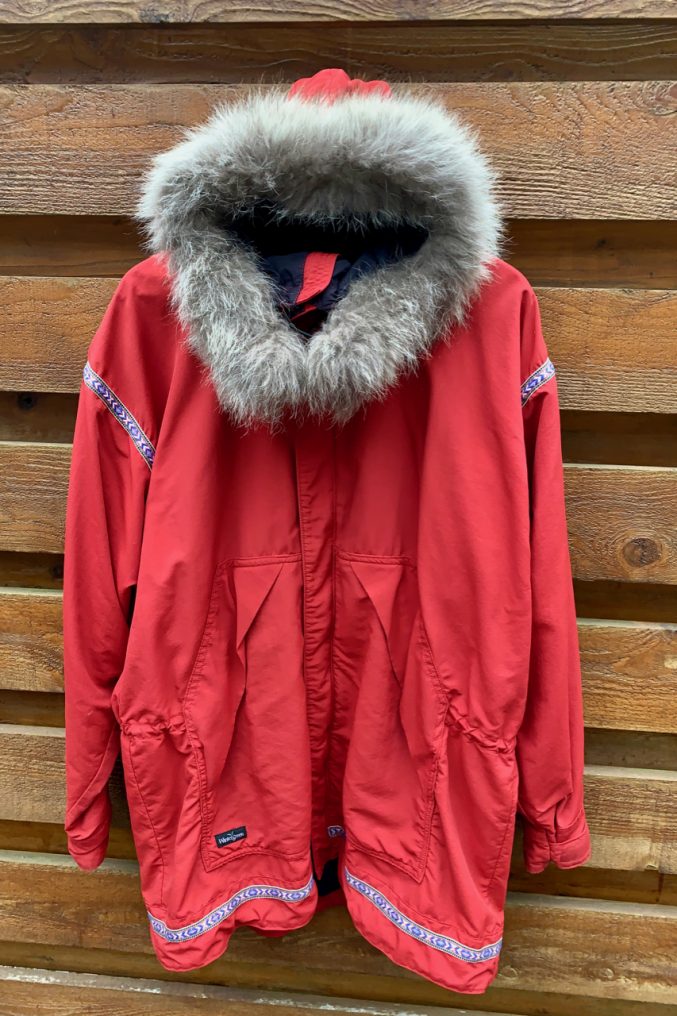 Made by Wintergreen Northern Wear and is a wind parka to be worn over other insulation Photo Credit: Terrie Hanke

Then I changed actually to a different parka to a different jacket that Columbia was making the last several years. Obviously they are a more well-known brand, not in the dog mushing world, more in the mainstream/everyday use. So they were using synthetic down and they were changing the baffing on the parka. The baffing is how they hold the down in place. You can typically see little seam marks all over the down jackets. Instead of using a sewing needle which pierces the parka, and supposedly allows air to get in and cold spots, they were pressing it, which wasn’t penetrating the outer shell, which supposedly would keep you warmer and wouldn’t allow cold air to get in. All of this stuff is cool, it’s over my head. But anyways I tried their parka for years and it wasn’t as good as some of the other things that I had used, but it was very warm. The outer layer was a little stiff when it got really cold. 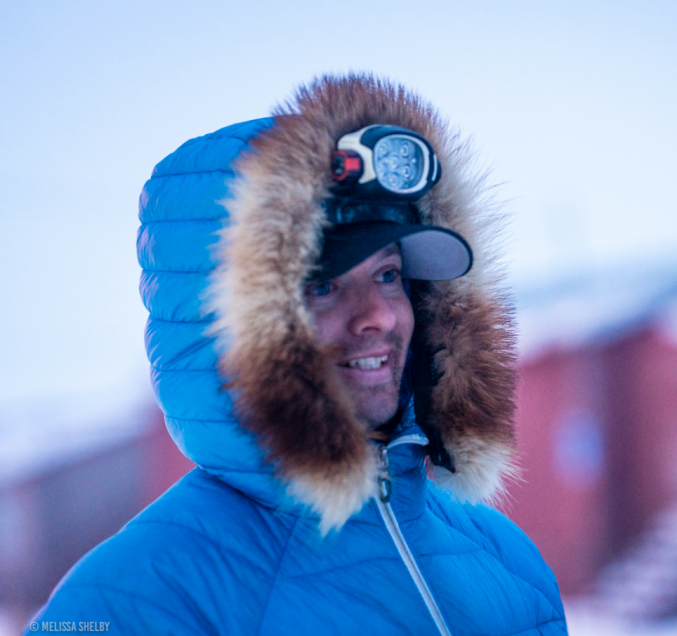 So this 3rd parka that I tried was the most recent; which was this year, and over the winter training season was completely all fur. Although it was very, very warm, and relatively lightweight, it was a little ancient in that it had no zippers, it had no velcro, it just slipped over you. And that’s as snug as it could be. It was really warm, and the only downside was that my breath would accumulate around the neck of the ruff and a lot of frost would develop and so the neck area would get a little stiff. Then when that would dry out, it would melt, so the neck was a little wet after I would rest. So ultimately, to answer your question in short, the parka is the most valuable item that I have. I have tried 3-4 different styles, and I have still yet to determine which one I like best, because they are all really good, and they all have their flaws too.

This last one was hand-made; completely hand sewn. I have a friend who married a dog musher who ran in the Yukon Quest, and they live in an Alaskan Native community near the Arctic Circle and so she learned how to sew and how to make garments in the traditional style. So I came about her through a friend and she offered to make me a parka. The entire parka was made out of lambskin and the skirt around the bottom is wolverine, and there is wolverine and seal and wolf on the ruff and beaver fur around the wrist. It’s really ornate and really decorative and really warm; truly one of a kind.”

As Told by Aliy Zirkle: 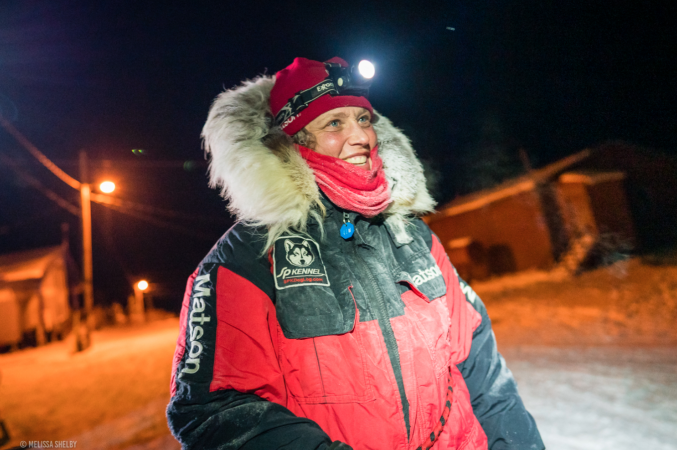 “For me, probably the most important change of clothing over the last 25 years has been my parka. Originally when I started racing in 1,000 mile races (the Yukon Quest was my first race in 1998) I wore the standard very warm, but very heavyweight, insulated anorak parka. It certainly kept me warm when I was standing on the back of my sled on the Yukon River at -40 degrees Fahrenheit but it also made me 15 pounds heavier. It was huge and came down to my knees. I needed to take it off whenever I ran up a mountain or did strenuous physical work and I hardly ever had a big enough space to carry it inside my sled bag. That’s how big it was! But, if I didn’t shed this parka, I would sweat too much and my entire inner layers would be wet … wet and cold is no good. Actually the combo is quite dangerous. But, a little over 10 years ago I started to wear a layering system that has an outer shell parka that is thin and lightweight. The layer just inside of this shell is a sponge layer. It is very light and keeps my body heat trapped in the spongy layering. If or when I sweat, the moisture will diffuse out of the sponge and into the shell layer and stick to it and freeze and fall off like ice. Anyhow – this system is a HUGE advantage to the big parka of yesteryear. Many mushers are wearing lighter weight clothing that is made of new technology materials. It allows us to stay warm and carry less weight. A win – win.”