Voices of the Volunteers: Richard Burnham 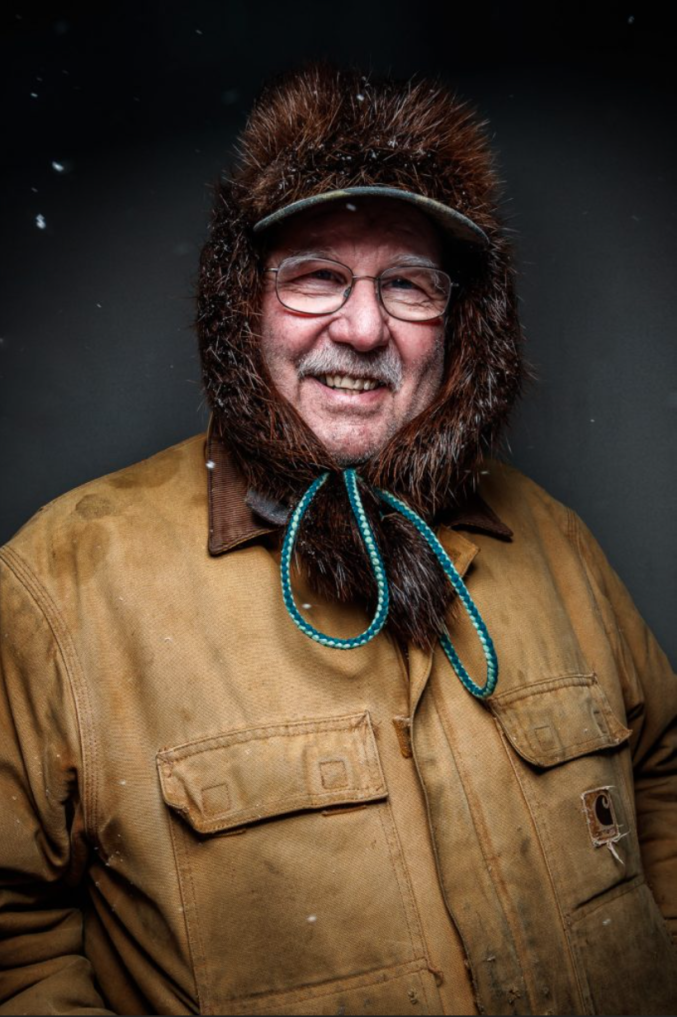 Richard Burnham of Kaltag, has served as an Iditarod Race Checker, Trail Breaker/marker, Clean-up crew member, and even participated in the race from 1975-1978. He has run the race with some of the early greats of the Iditarod, including Susan Butcher and Rick Swenson in their rookie years. He has also gotten to know many of the other mushers since then and has an incredible connection to Joe Redington Sr. 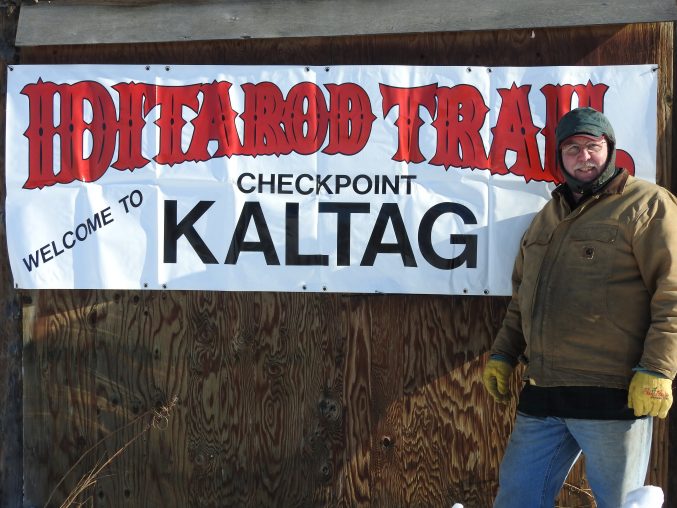 “I came to Kaltag in the 70s as part of a guiding operation. I was the ‘low man on the totem pole’ for guiding and I got to learn in some of the greatest country the state of Alaska has to offer. I spent weeks at a time on the Innoko River in the Fall, which is one of the most incredible moose hunting areas. So it was our job to take the hunters out to get their moose, and then butcher it up, pack it up to get it out to the river where we could fly it back to Kaltag. So that was my big job in the Fall.

I just happened to be in the right place at the right time with the right skills that the jobs [at the time] were looking for. I had just gotten married, and I had the opportunity to make a living for ourselves. It was a great deal just to get a job. My wife for a number of years was the mayor of Kaltag, so we both got really involved. The more years you are here, the more involved you get. I’ve been heavily involved with the fisheries on the Yukon River. We started an organization called YRDFA (Yukon River Drainage Fisheries Association). That led into other things, I ended up being on the Yukon River Panel which is a treaty based panel. Just a lot of stuff like that comes along, so I end up getting involved in a lot of that sort of thing, so that keeps you busy!” He has also played a key role in establishing the Tripod Flats Cabin located about 35 miles from Kaltag. https://www.alaska.org/detail/tripod-flats-safety-cabin

“When I first came to Alaska, I had an aunt who told me ‘when you get to Alaska, keep your ears open for some Redingtons, we’ve got some relatives who live in Alaska.’ I thought, well, yeah, I’m going to this big state of Alaska, how the heck am I going to hear about a Redington? It wasn’t more than one day that I got here, and the guy I had contact with started talking about this Iditarod race, so I said ‘Well what the heck is that?’ He answered, ‘Well, it’s a dog race that goes from Anchorage to Nome, and there’s this guy up here who started it and is the Father of the Iditarod; Joe Redington’. As soon as he said it, I thought, Redington, huh, I wonder.

So I went up to Knik that same afternoon and we stopped at Joe’s place and Vi was home, Joe wasn’t. Vi was saying that he was out on the trail and doing some work on the trail and so I told her, I said, ‘Well, there is a possibility that I am related to Joe’ and I said, ‘Where was Joe born?’ She said ‘KingFisher Oklahoma’. I looked at her and I said, ‘Yup, we’re related!’ So when we [finally] touched base that first time, he kind of smiled and said ‘Yeah, Shawna and Ed are my aunt and uncle’ and I said, ‘Yeah, they are my great aunt and uncle’. So ever since we knew we were related, it was kind of that unseen connection. It filtered down to the boys, Raymie and Joee. Ever since that first time I told him about it, he always called me cousin.

I’ve talked to the boys, and Raymie’s boys about it and they have come to know me, and I know them of course. So when they come into Kaltag, they always try to look me up if I’m around. So I have that connection to the Father of the Iditarod.” 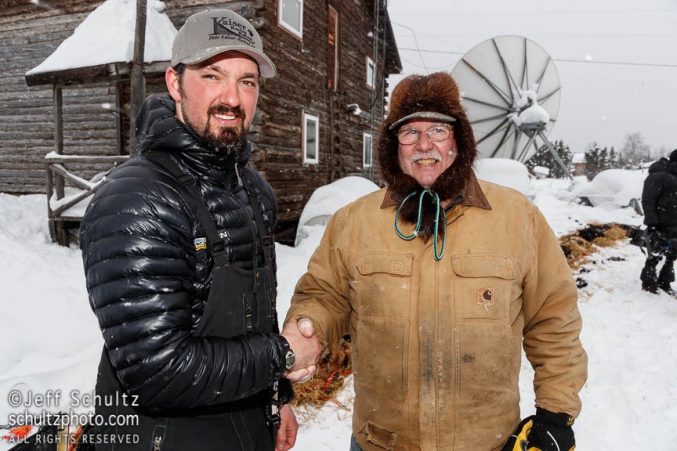 “Meeting people. For a long time I knew a lot of the mushers and it was nice to touch bases with them. Not a big conversation, but just to jabber a little bit because most of the time they were pretty busy taking care of their dogs. You know, just renewing your acquaintances with them and help that you have given in the past kind of built up together.

You know, guys like Rick Swenson. I ran the race with Rick. One of the last years I raced was his first year. One of the last years he raced, we were having a conversation. He was parked right near the community hall [which was the] checkpoint. I was talking to him and it just kind of entered my head, I just asked a question. ‘Hey Rick, you’ve run this race almost every year. Has it ever entered into your mind, at some point that you may not want to run the race?’ Man, if you know anything about Rick, you can’t believe how red in the face he got instantly. So I said ‘Wait a minute Rick, it’s just a question. I’m not trying to push anything here, it was just a question.’ He was still busy working with his dogs, so I just stepped away a little bit, and did not press it anymore. And you know it wasn’t a year or so more after that, then he did [stop running Iditarod]. All I can say is I am fortunate to have raced with him. To me, Rick Swenson is always going to be the greatest champion the Iditarod ever had.”

“It’s more of my connection to the race and having run it for 4 years. I just felt an obligation when I wasn’t racing and the race came right through my community that somehow I could help out. It’s just that sense of wanting to give back, to help, that kept me coming back. In the later years, say the last 10 years even, I’ve not done the work of the actual checker. Their job is to meet the mushers, count their dogs, this as and that, you know. I haven’t done that just because it’s a lot of work. So I thought that my helping the Iditarod [now] is to make sure everything goes; that there’s a place for the mushers to stay, all the logistics are in place to help take the dog food that comes off the airplanes. I have a building that I have been given access to by the city of Kaltag. So I have a place to store all that dog food so it will be kept out of harm’s way and stuff like that. So that has been my job with the Iditarod since. I’m just around the guys that are doing the checking and if they need whatever, I make sure that they get it.” 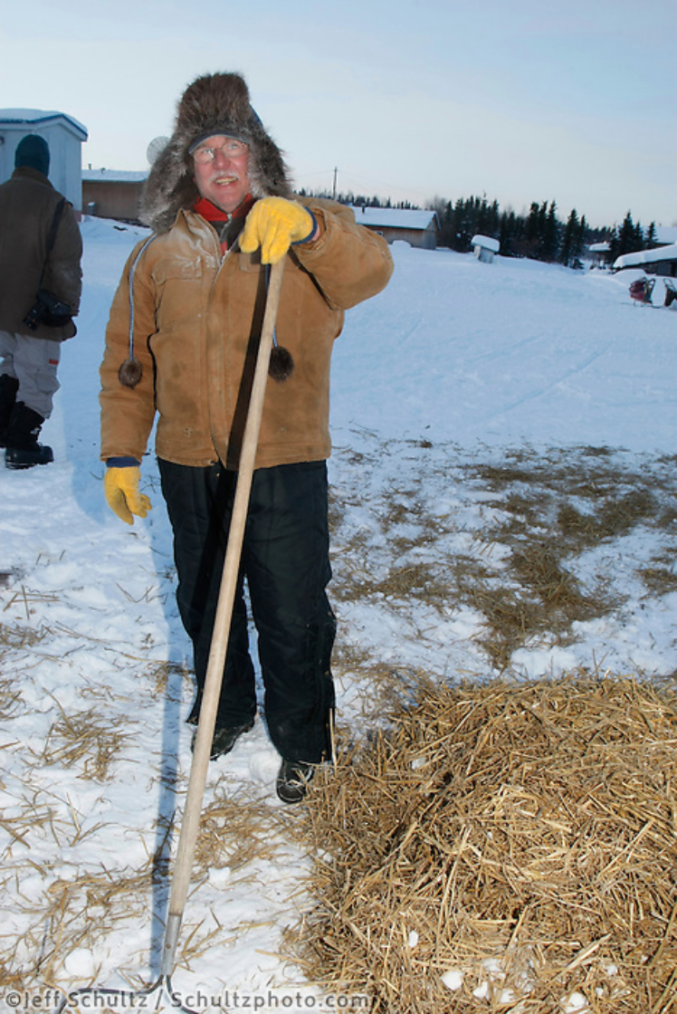 “In the early days, there were not all the trailbreakers. I spent a number of years going all the way down to Eagle Island putting in the trail the night before mushers were to get to Eagle Island. Those were pretty hard jobs breaking trail that hadn’t been broken out all winter. That area gets a lot of snow down there and it’s really difficult to put in trails sometimes. The other part of it is that one year because we didn’t have trail markers, there was an interaction I had with a musher.

I was checking that year. There were times that 5-6 teams would come in simultaneously. So you’re busy trying to get those guys checked in and show them where the stuff is, and at the same time you’ve got mushers who may have been there already and are ready to leave. So they are coming to me wanting to know where the outgoing trail is and we didn’t always have markers to mark it. The trail was in, if you knew where the trail was but there were no markers on it. So one year I was really busy helping guys and the musher was leaving, so I was pointing to him and showing him. ‘Ok go down to that road down there, and then pull right out from there. So I continued to check mushers in, and I saw him leave, and it wasn’t 10 minutes later and I looked up and here he comes back in, hauling away. ‘You’re purposefully trying to get me lost so I’m going to lose’ and this and that. I didn’t know what was going on until I was able to walk over to him and he said ‘You put me down the wrong trail. I went out there, and found out it was the wrong trail, and you guys are just trying to keep me from winning’. I said to him, ‘I’ve been busy trying to work with these other mushers that are here and I’m the only checker here right now. I’ll go out there with the snow machine, and you can follow me out and I’ll put you right on the trail.’ So I did that. I got ahead of him real slow, got him out and I didn’t realize that other people had been using a wood yard trail. I didn’t know that it had been opened up. There was a wood yard trail that was a fork. The main trail went straight ahead and he took the right hand fork and ended up on the wood yard trail. I told him I said ‘This is the trail right here’. Maybe he didn’t realize that in the early days I was it, I had to do everything. There was no time to run out there to put up the markers, if we had markers. Just because the Iditarod was in its infancy, and was still developing and we didn’t have all of the bases covered. So that was one of my earlier experiences.”

Check out this video clip of Richard receiving an award from Iditarod and a brief interview with Greg Heister.

Teachers: Since Richard helps “problem solve” many of the things that come up at the checkpoint, check out these lessons about problem solving and creative thinking from Linda Fenton!