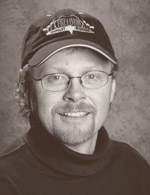 Clint Warnke, 37, was born in Alberta and raised in Saskatchewan, Canada. He started mushing in 1997 and began working with Doug Swingley's puppy team in the fall of 2000 and ran his first Iditarod in 2001. In the fall of 2001, Clint then started working with Dr. Sonny King and the Veterinary Educational Team and helped train Sonny's team for the 2002 Iditarod. Clint went on to run the 2003 Iditarod with the same team and won the Most Improved Musher Award. In the summer of 2004, he moved to Alaska because he wanted to experience Alaska and train dogs. This year, Clint is running his own young dog team and is continuing to work with the Veterinary Educational Team, which teaches children in South Carolina about northern breed sled dogs and the Iditarod. Clint enjoys hunting, fishing and running