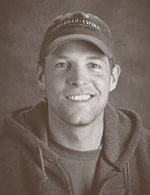 Dan Carter, 36, was born and raised in central Indiana where he earned a B.S. degree in construction management from Purdue University. He began his mushing career in 1995 as a tour guide in the Boundary Waters of northern Minnesota. Currently, Dan trains and races out of Jackson Hole, Wyoming. 2007 will be Dan’s sixth year of competitive mushing and his first year as an Iditarod competitor. He has raced in Oregon, Maine and points in between finishing as high as fifth in Wyoming’s international stage race and first in the 2003 Grand Portage race in Minnesota. Dan spends summers working as the operations manager for Barker-Ewing River Trips in Jackson Hole. He says he enjoys mountain biking, rafting and travel.