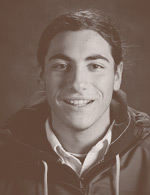 Quinn Iten, will be 18 in December of this year and the youngest musher to enter the 2010 Iditarod and one of the youngest ever to run the Iditarod. The son of Iditarod veteran, Ed Iten, Quinn said he thought it was "only natural" that he would run the Iditarod before he leaves home. Since the age of four, he was raised on a homestead in northwestern Alaska, 30 miles above the Arctic Circle. Their family included five horses, 12 chickens, 2 goats and about 60 sled dogs. He ran his first race at the age of six and ever since, has wanted to follow in his dad's footsteps and one day race the Iditarod. A veteran of the Jr. Iditarod, where his best finish was third in 2008, Quinn is a senior in high school and will graduate in December of this year. Next year, he plans to attend the University of Alaska at Fairbanks but says "I have no clue what I will major in." Quinn says he enjoys "hunting, fishing, horses, rock climbing and anything else exciting and outdoors."