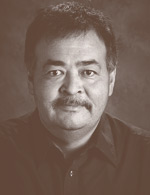 Middy Johnson, 43, was born and raised in Unalakleet, Alaska. He says he's been mushing since he was in seventh grade. In 2008, he decided to run the Iditarod after having two brothers who ran it in previous years. He says, "Mushing has been in the family for along time. My grandfather, Henry Ivanoff, was part of the original serum run, having been the one to hand off the serum to Leonhard Seppala. I've been in and out of dogs as time permits. I have a small kennel of dogs — collected a few leftovers from friends. The Iditarod seems like a challenging race3 and I thought it would be nice to travel the trail with John Baker and Martin Buser. I'm disappointed that Aaron Burmeister retired (he must have known). My youngest son loves dogs and the wife is coming around!" Middy has been a fish buyer for the last three years and is a member of the Unalakleet Native Corporation, the Norton Sound Sled Dog Club and Unalakleet Search and Rescue. In his spare time, he enjoys fishing and harvesting Native foods. Middy and Aurora have three children, Sasha Kendra, 18, Shyler Kateal, 14 and Sikulik Kennan, 10.