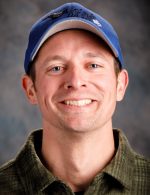 He and his wife Liz own and operate Alaskan Husky Adventures in Willow, Alaska, where they offer locals and visitors a chance to meet their Iditarod team and experience the joy of dog mushing for themselves.

Their race team name, 17th-Dog, is a tribute to their supporters. For many years, mushers could take 16 dogs on the Iditarod. Family, friends, and fans of the team are symbolically dubbed the 17th-Dog that make it possible to race.

Originally from Ohio, Matthew’s passion for Alaska’s official sport started with a summer job at a dogsledding camp in Juneau. There, he adopted his first Alaskan Husky, Fionn. Matthew’s love for mushing eventually grew into a full-time profession when, with the help of friends, family, and mentors Martin Buser and Matt Hayashida, he established his own kennel in 2013.

Five years later, the Iditarod Trail lead Matthew to his biggest prize yet. He met his wife Liz, a former news anchor, while competing in Iditarod 2018. Their wedding, which included their 53 dogs, was featured in The New York Times.

Through racing, Matthew strives to empower and support young people to pursue their dreams. He remains heavily involved as an Ohio State University alumni, in Catholic charities, Boy Scouts, and local schools.