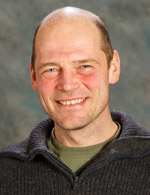 Tommy Jordbrudal, 44, was born and raised in Kragero, Norway. He first began mushing in Juneau in 1990 and immediately began dreaming about the Iditarod. He and his family have lived in the northern most society in the world (78 N), Longyearbyen, Norway, since 2007. Before moving to Longyearbyen, they did long distance racing. He has run the major distance races in Norway multiple times. But there were no opportunities so far North. They live two days by boat from mainland Norway. They have enjoyed the Arctic wilderness and starting long dog sledge expeditions from their doorstep. He also guides dog sledge trips from day trips to longer expeditions over weeks to such places as the North Pole. Their dream came true this winter when Janne got the opportunity to stay almost a year in Fairbanks because of her job as a visiting researcher at the University of Fairbanks. In the fall they will be bringing the family and eight dogs to Alaska, with the plan of buying eight to ten more dogs when they get here so he can run the 2014 Iditarod. Tommy and Janne are the parents of Gaute, 4, and Tril, 2. He says he enjoys outdoor life and hunting.