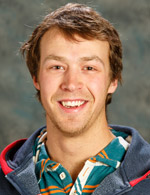 Christian Turner, 26, was born and raised in Dorrigo, Australia, where it never snowed. He began mushing in 2008. He says, “I have thought about the Iditarod since the first day I stood on the runners in Banff National Park.” One of only a handful of Australians who know what dog sled racing is, let alone one that competed in Alaska, Christian has spent the last six years between the hemispheres. He works for the winter in Australia, than travels to Canada or Alaska to train dogs and compete. Christian has helped Dallas Seavey with his training for the last few years. In 2014, he ran the Seavey puppy team and came in 38th. This year he wants to improve on his placement and show the rest of the world what “Aussies can do.” Christian is currently living in Western Australia and working in the mining industry. He says his hobbies are surfing, travel, and dry land mushing.