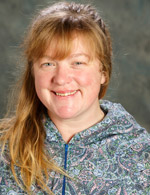 Abbie West, 40, was born in Oklahoma and raised in New Jersey. She went to school in Maine, where she was an avid downhill skier. She came to Alaska almost 20 years ago, chasing a childhood dream of being a musher. She started out working on fish docks in the summers on the Kenai Peninsula, but she says she came here to be a musher, so she started her own kennel in 1998. “I also love astronomy and astrology, so I decided to name my dogs the Cosmic Canines. They all have stellar names and you know what? These dogs are ‘outta’ this world. My main focus so far has been the Yukon Quest, but I decided this year to run the Iditarod and I’m excited to see new parts of Alaska. My dogs are mainly Yukon Flats Gwinch’in village dogs from Jay Cadzow’s bloodline. They are tough and happy because they have been bred for generations to be used as working dogs; trapping, hunting and travelling. Actually, half of the team has already run the Iditarod, leased to other teams, so I figured it’s time I join in some of the fun too. They are young, between one and five years old, but most have multiple 1000 miles races under their harnesses so I expect them to perform well. She is a very experienced musher, having run the Quest three times and many mid distance races in Alaska and Canada. ” Abbie has worked in landscaping for the last year. She lists her hobbies as astronomy, astrology, running, hunting, baking, goats (dairy), mountain biking, archery, writing and poetry.