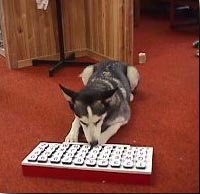 It’s hard to believe that the first mushers have reached the checkpoint of Iditarod.

Lance Mackey was the first to arrive and that means, he won $3,000 in gold nuggets and he got a trophy.   Sure wish I could have been there to see the smiles on the faces of my fur friends!  I bet they were proud to have been first to arrive.  I think no matter what you are doing you should give out a howl of congratulations to my fur friends and Lance for all of their hard work on the trail.  Getting to the halfway point first is quite an accomplishment.

Iditarod is a ghost town now but it used to be a very busy gold mine community.  It’s a fun place to research and learn about so  I hope you take a little time to day to do that.  Sled dogs played an important role in life in Iditarod and other villages way back when Iditarod was a busy community.  Do you think the past history of Iditarod has anything to do with the prize they give out to the first musher arriving there?