Libby’s last night at Sab’s Before Moving to Indiana

I know you already have met Libby Littles, our K9 Journalist, but we know you’d enjoy meeting our sled dog friend, Libby, who now is retire and lives in Indiana with her human and K9 family.   Libby is a very special and talented sled dog.  Just as our Libby Littles touches the hearts of our young readers with her ‘little’ stories and articles, THIS LIBBY spends time with young children, too. 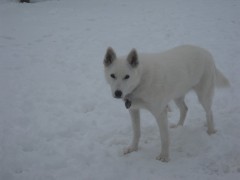 In November of 2009, Libby made the long flight from the Yukon Territory to Indiana.  She has been the featured guest at Magic Moments Child Care Ikidarod.

Today, Libby is happy living in the house with five other retired Alaskan huskies and a malamute.  While she enjoys playing outside in the snow, she now prefers her pampered life as a pet.