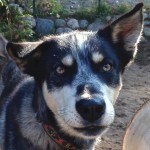 How many times have you given special recognition or awards to your students in the classroom? For what types of things do you choose to recognize them or reward them? How do you determine what the qualifications for each will be and ultimately who will get the award?

A special recognition in the Iditarod Dog Sled Race is the Honorary Musher, Bib #1. The Iditarod honors someone as a special way of thanking the person for contributing to the race in the past or making a significant contribution to the dog racing sport. The person selected as the Honorary Musher will wear Bib #1 at the Ceremonial Start and usually will ride in the Junior Iditarod Champion’s sled. After they have travelled down the ceremonial trail, the rest of the Iditarod competitors will leave at 2-minute intervals from downtown Anchorage. If the chosen Honorary Musher is not living, a representative for that person will wear the bib and ride in the first sled.

Have your students investigate the following questions to introduce them to Honorary Mushers:

*What is an honorary musher?
*Who has been one in the past?
*What has been his/her connection with or contribution to the race?

Answers to these questions may be found on the Iditarod website as well as http://iditarod.com/about/champions-records/.

After students have researched the past Honorary Mushers and their contributions, present them with this question:

*If you could choose the Honorary Musher for the next Iditarod Dog Sled Race, who would you choose and why?

Have students write a persuasive essay. They should be able to support their choice by giving reasons, details and examples. You could use any age-appropriate format or outline that you have available to help your students plan their essay. Once the final copy has been completed, extend this writing lesson to include a speaking element. Have students present their persuasive essays to the entire class. Students could also make and decorate a life-size person outline to resemble their Honorary Musher complete with Bib #1. These could be displayed in your classroom along with the persuasive essays.

Ultimately, when all essays have been presented your class may want to choose one person that would then be considered your class’s Honorary Musher.

Have fun and encourage your students to “dig” deep and research people of the dog racing world or Iditarod.