I Kid A Rod Project Samples

Our fourth grade students participated in a Mock Iditarod Race this past spring.

Prior to this, the students spent several weeks learning about and tracking the Iditarod Dog Sled Trail Race held in Alaska.

Students were divided into six teams of 11 or 12 members. Each team had to have a musher, veterinarian, one or two lead dogs, one or two wheel dogs, activities director, and a reporter. The teams raced around the track, stopping at 9 checkpoints along the way to complete a task. Some of the tasks included finding the range, median, and mode of the distances between the checkpoints on the Iditarod, Iditarod trivia, creating a stem and leaf plot from the given data, and a bootie relay using chairs.  The reporter had to interview his/her musher at least once during the race.  The veterinarian signed the musher’s notebook at each checkpoint.

The activities director took charge of the tasks at each checkpoint. To make it more challenging, the students had to package a raw egg (representing the diphtheria serum) and carry it along with them in their wagon (representing the sled). If the egg/serum was damaged, the team lost points.

We started the teams at 2 minute intervals and the winner was determined by points.  They earned points by having the fastest time, correctly completing each task, having the appropriate materials in their sled (pairs of socks, notebook, etc.), and having an unbroken egg.

As teams finished the race, they were treated with trail mix. It took about two hours from start to finish.

The sled for each team was a coaster wagon with a rope tied to it.  The musher ran behind or beside the sled giving commands, while the other members of the team pulled the sled.  There was one teacher assigned to each team to troubleshoot any problems.

For more information and pictures, visit  http://marionlocal.k12.oh.us/elem/stu_projects/2009-2010/iditarod/index.htm
Hope this helps other teachers,
Brenda

A Human Iditarod in Minnesota

The classrooms competed against each other using human power.

Fun day had by all! 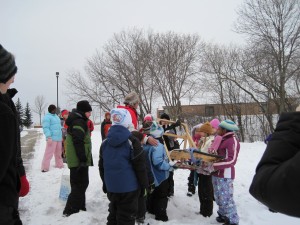 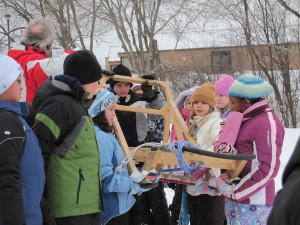 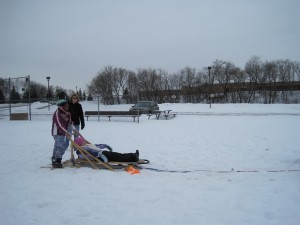 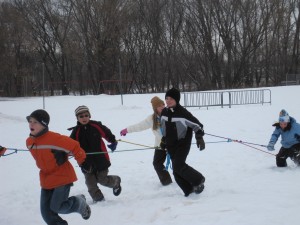 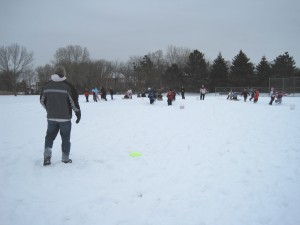 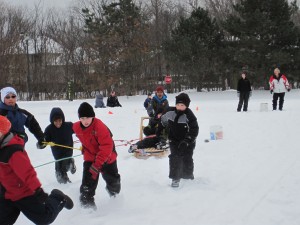 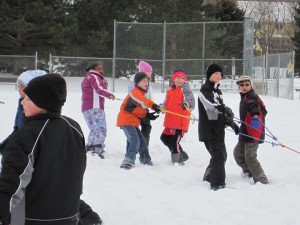 I KID A ROD Season Begins!

By Joy Davis, Educational Journalist, IN

Educational Journalist Joy Davis of Indiana and her classroom paraprofessional, Amanda Dolan, continued spreading the word of the Iditarod while on winter break.  Only this time instead of teaching high school students they went to the local daycare.  Children ages 5-7 were attending a day camp with a theme of winter.  The day started by watching the DVD “Razzma-Taz.”  This told the story of training for the Iditarod from the dog’s perspective.  This DVD can be purchased at: www.vernhalter.com

The children then were ‘harnessed’ up as puppies with a musher. To keep their feet safe from the elements they also wore ‘booties.’ After being told the race rules, they started off to run the trail and reach the finish line.  Along the way they stopped at checkpoints.  Here the puppies were snacked (with puppy chow- the recipe follows) and their vital statistics were checked by the ‘vet’ after they signed in.  They even encountered moose along the trail!  After reaching the finish line, both teams received flower garlands for their photos. After the teams were unharnessed they went inside to listen to the reading of Akiak by Robert J. Blake.  A great time was had by all!

*(Make sure that you do not have any children who are allergic to peanut butter.  Always check for allergies!)* 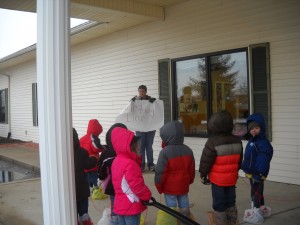 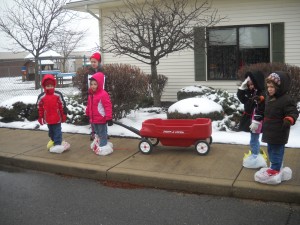 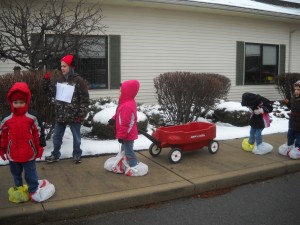 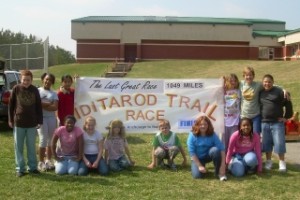 Cindy’s brother made them a wheeled sled for their Idita Race.

Each year, hundreds of schools around the world hold their own Iditarod  in parks, on school grounds, along beaches, or even in backyards.  After studying the race and completing lessons, the learning is put to test in classroom or school wide Iditarod events.

No matter what you call it— Mini- Iditarod races, IKidARod,  or School Iditarod, the result is the same.  Students practice basic content skills and enjoy the race.

Send us pictures and information about the Idita Race in your school or community to help teachers plan their future events! 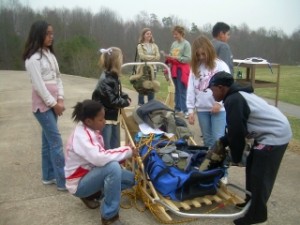