Iditarod Beginnings, or How Teachers Start Using Iditarod as a Teaching Tool 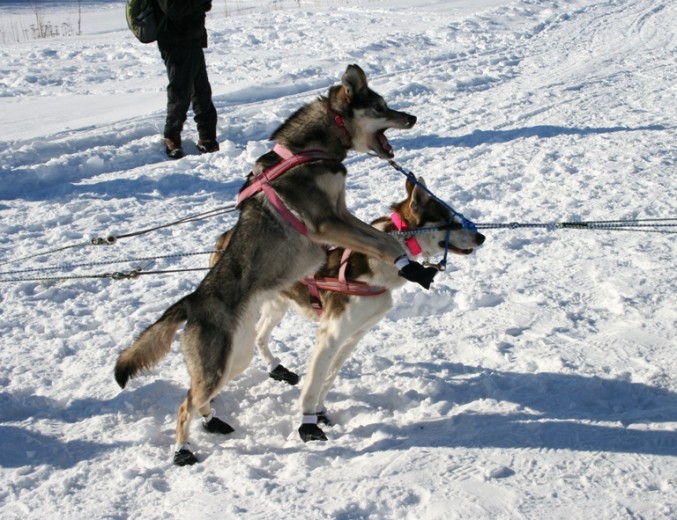 Teachers rejuvenate themselves and their classroom teaching by trying different ideas, activities, and different techniques to catch their students’ interest and boost learning. The Iditarod is one of those different topics to use as a teaching tool to facilitate student learning.

How do teachers discover the Iditarod, and how do they use it in their schools? Three North Carolina teachers share their Iditarod beginnings in this article. These teachers teach in the public schools, have experienced the Iditarod’s magnetism, and, even without having attended an Iditarod race, understand its usefulness to teach the skills students need to be 21st century learners.

Donna, a technology facilitator in Catawba County, discovered the Iditarod as a teaching tool in 2002 while surfing the net for ideas to share with classroom teachers. Instructional Technology Facilitators are based in the system’s schools, and they can make teachers aware of ideas and help them with integrate them into the curriculum. “Our teachers are so covered up that often they don’t have time to look for new ideas, nor decipher how to implement them. Helping teachers to integrate technology is one of our priorities and responsibilities,” says Donna.

Introducing the Iditarod to one classroom teacher in 2002 led to approximately thirty classrooms in Donna’s school system using the race as a teaching tool. The school system has a website with information and activities located in one place for their teachers’ use, http://www.catawbaschools.net/Teacher_Resources/eIditarod/default.aspx .

“I witnessed how engaged the students (as well as the teacher) became and I knew I had to get other classrooms involved,” reports Donna. Sharing the experience with her four co-workers, they were able to get more teachers involved by sending out emails introducing the program and volunteering to help the teachers with implementation.

“Each year my co-workers and I sit down with the interested teachers at our particular schools for a collaborative meeting and create a plan of action.” The word spreads further through two Iditarod-sharing workshops with the veteran Iditarod teachers speaking so passionately about the topic and its usefulness that hearts are touched. Primarily used in the system’s K-6 classrooms, a middle school and high school class also use the race with their special populations.

Jodie, a Cabarrus County middle school teacher, started using Iditarod about 16 years ago when the Academically/Intellectually Gifted class at her school studied Woodsong by Gary Paulsen. Iditarod fever spread through the entire middle school and the next year, all three grades read Woodsong and a core group coordinated a schoolwide plan, including 49 relevant facts and the implementation of this plan, for the teachers and classes. Dr. Sonny King, a South Carolina Iditarod race veterinarian AND musher, became part of their study. The school sponsored one of Dr. King’s dogs during the race and enjoyed Dr. King’s post-race school visit. “Their” dog’s harness was labeled “Sponsored by JN Fries Middle School”, and was presented to the school.

Opening a new middle school in the same school system, Jodie and another teacher brought Iditarod with them, and the entire sixth grade, 18 classrooms in 2010-2011, studied the race and read Woodsong. Jodie uses the race to teach science skills, organizes classroom tables of students by “litter” names, and students create Student on the Trail patches for a 3D sleeping bag covering a wall. (Mushers often name their litters according to themes, such as different models of Toyotas for the Toyota litter; Yaris, Corolla, Camry.) In the spring, the school hosts musher Hugh Neff to regale the students with stories of the cold, the dogs, and the Iditarod.

Elementary teacher Kim, in Iredell County, discovered the Iditarod when her then-fourth grade son was following the GPS tracker for the race in his class. Using it fulltime since 2008, Kim introduces the race the first day of school, and it is embedded in her class as a teaching tool and as a classroom management tool. Read on to see how Kim uses the race to teach those standards and skills.

* Reading– use material found on musher websites and blogs (with minor editing to make it grade appropriate). While much material pertains to dog care, bring in the global experience by researching mushers’ native countries and their customs and traditions. Talk about some generalized, global stereotypes from around the world. Eyes are wide open as we watch videos of students their age returning from a seal hunt and harvesting the blubber using a sharp ulu (oo-loo) blade.

*Science and social studies–Compare landscape and climates of Alaska and North Carolina and what effect they have on lifestyle. If we have questions about something we have read or learned, we email people from the villages for guidance.

* Research the landscapes between checkpoints, use elapsed time to find run times, track rest times and feeding schedules, and collect data on dogs dropped (from teams) to find a correlation.

* ‘Iditarod Trail’ of Life Game using Covey’s 7 Habits of Highly Successful Students to find tools for overcoming life’s obstacles when they arise. Watch Insider clips during the race to match the habits to the situations on the trail and predict outcomes based on habits being modeled by the mushers. Students determined a correlation between struggling teams having mushers who struggle to use these 7 habits.

Kim summarizes her Iditarod classroom experience, “I have learned more from listening (to) mushers speak about their dogs and interact with their team than all of my college classes together. That is why I use the Iditarod in the classroom beginning with the first day of school. Oh, and because kids can relate to dogs and love learning through them!!”