With April Fool’s day occurring at the beginning of the month, I thought it would be a perfect time to ask some mushers about their funniest moments on the trail. I have heard multiple stories about hallucinations and sleep deprivation, but interestingly enough, none of the mushers talked about any of those kinds of moments. Here are some of the stories that a few mushers shared with me about their funniest moments in their mushing careers.

“One of the funniest things that happened to me is that every year, I’m not a photographer, friends and family would say ‘Why don’t you take some pictures? What’s it like out there?’ Well you have it in your mind what it is out there. And today after all these years I can go over every inch of that trail in my mind, all the way to Nome. It is just something that is so embedded in your memory, that you are just never going to forget it. So one year I did take 2 of these disposable cameras with me. One of the films froze and I didn’t get anything of it, and the other 36 pictures from the other camera were the butt ends of my dog team. I mean, that’s all you concentrate on, you know?” 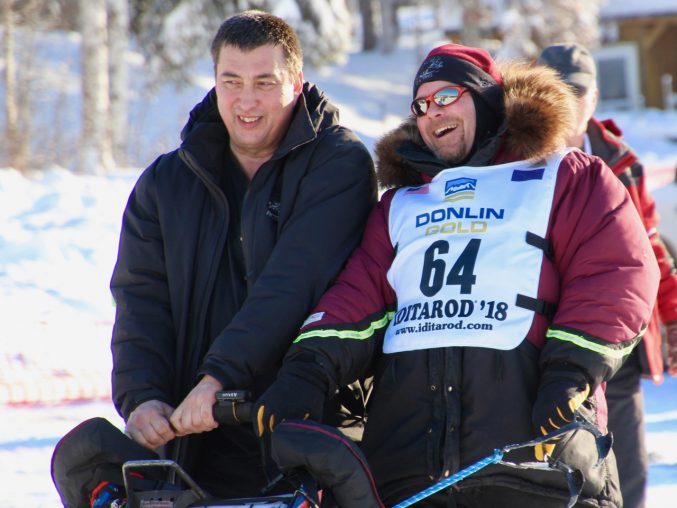 As told by Pam Flowers:

“The story that you may find interesting though not a knee slapper was before the 1983 Iditarod. The winter of 1981/82 was my first year of mushing and I was not into racing. Long distance mushing is what interested me so it seemed like a good idea at the time to gain experience by getting on the trail the day after the race started and sled to Nome on my own. In the fall of 1982 I went down to the Iditarod headquarters and asked Joann Potts if she would tell me what the checkpoints were so I could mail supplies out to myself. At that time information was not something you could just look up on a computer like you can now. Joann looked at me and said something like, ‘Ummm, no. It would be better if you entered the race.’ Not wanting to do that, I thanked her for the suggestion and left.

A few months later I decided that I would enter the 1983 race because it seemed way easier than trying to figure out all the logistics on my own. So I went back to the Iditarod headquarters, walked into the office and said to Joann, “I’d like to enter the race.”  Her eyes widened slightly as I stood there waiting for her response while she sat there staring at me in silence. As the seconds ticked slowly by I thought, any time now she’s going to launch into a lecture about my finally coming to my senses. The silent waiting began to feel awkward as more seconds ticked by. I looked at the floor, shuffled my feet, and thought, maybe she wants me to leave, maybe I should just go. Then, just as I was turning to leave, Joann’s mouth opened slightly and I took that as a sign that maybe she was going to say something. Finally, the silence was broken when she whispered in a barely audible voice, “The tenth woman. Ten women are entering the race!”

There was no lecture, no telling me to leave. Few women entered the Iditarod back then and it meant so much to Joann that this would be a record number of women running the Iditarod. I guess it’s more heartwarming than funny.” 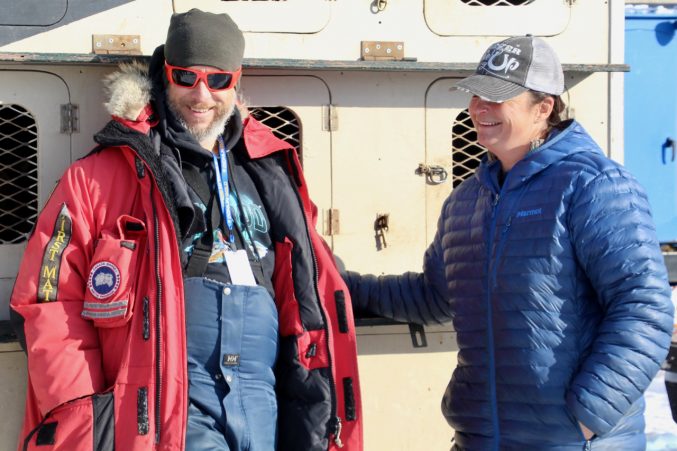 As told by Jeff Deeter

“Some of my funniest moments on the trail have been in times of sleep deprivation. For whatever reason, when I am extremely tired I find more things entertaining than they might otherwise be. In my first Iditarod, I ran about 700 miles with another musher. We had a very similar race plan, and ended up leapfrogging each other every run. My team was faster, and I would let him leave the checkpoint first, and then catch him on the trail. As we approached the Yukon River, he picked up a bit of a stomach bug. This ended up plaguing him for our entire trip down the river. On our final leg, he departed Nulato about 30 minutes in front of me. As I caught him a few miles before Kaltag, he stopped his team to let me go by, but did not stand up (remaining seated on his cooler as my dogs ran by). This struck me as abnormal, but I didn’t give it a lot of thought.

As we parked side by side in Kaltag, we chatted about the run. He explained that he was sick for the entire distance, and finally, after stopping multiple times to do his business, turned his cooler into a toilet, and was in the process of using the bathroom as I passed him on the river (explaining why he didn’t stand up). This was about the funniest image (especially at 2 am at mile 700 of Iditarod), and we laughed whole-heartedly at the situation for about 30 minutes. There were a lot of funny moments in that race, but that night will forever stand out to me.” 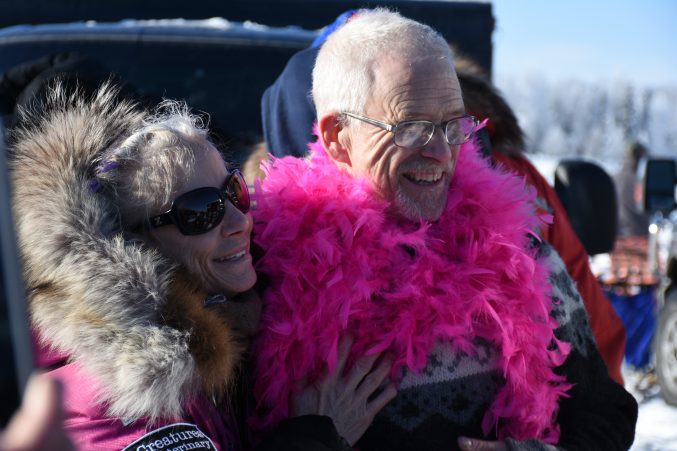 Teachers: Here is a lesson that I thought went along perfectly with this month’s theme. 2019 Teacher on the Trail™ Brian Hickox developed this lesson about making memes from funny trail photos. It is perfect for grades 5-12. Iditarod Lesson: Making Memes 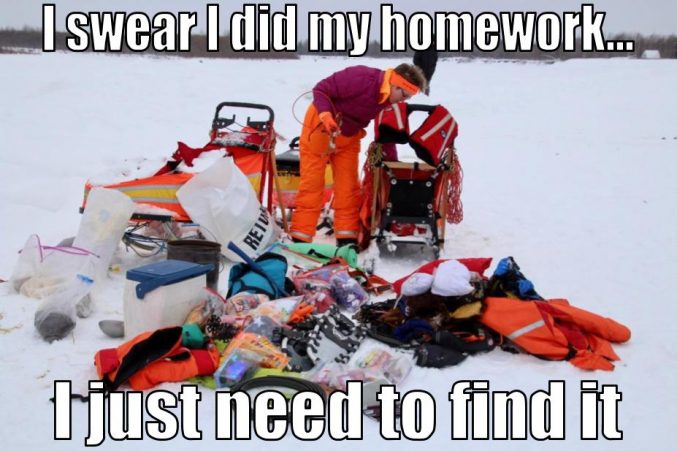