Moments with Mushers: Training the Team

“Training”, as I have learned, begins with relationships. This month, mushers are running some shorter races and working with their teams to ensure they are ready to go by the time Iditarod rolls around in a mere few weeks. From the mushers I spoke with, all of them attested to the fact that the bond between musher and athlete (the dogs) is vitally important.

The importance of this relationship was very evident to me during my trip to Anchorage last year as a finalist. Witnessing the interactions between musher and athlete was amazing. All of the dogs that I had the pleasure of seeing and working with were very personable and loving animals. This all stems from the practice of introducing dogs to people as often as possible in their early years; or “peoplizing” them as Dan Seavey puts it.

This aspect of mushing is another reason why I love the sport and this event so much. The bond between human and canine is obvious as they both depend greatly on each other during the trek to Nome each year. It is simply amazing to witness this interaction.

Here is what some mushers have told me about their training of the athletes.

One thing that I have learned over the years is to have the older dogs do more of the training for the young ones. The dogs learn very well from each other and that took me a while to figure out. But you learn by making mistakes, and I made plenty over the years and learned from each of them. Along with that in the training of the pups is to make sure you “peopleize” the dogs and handle them and play with them as much as you can. This helps form that bond and also allows you to get to know the dogs better from a younger age. I remember going to the lot and almost getting soaked from all of the puppy licking.

We [the Seavey Family] have now trained over 22 generations of dogs, and the breeding is a really important part of that too. Back when I first started I would take anything that looked like a sled dog and try to improve my team, and over the years the dogs have gotten faster and stronger, and a lot of that is because of the breeding. When you train dogs, it’s just like training anything, people, horses, you name it… You have to start with shorter distances and build to the longer distances. Once you have reached a good distance, then you start to add some more weight to the sled. Then it builds, and that is how I have always trained my teams. 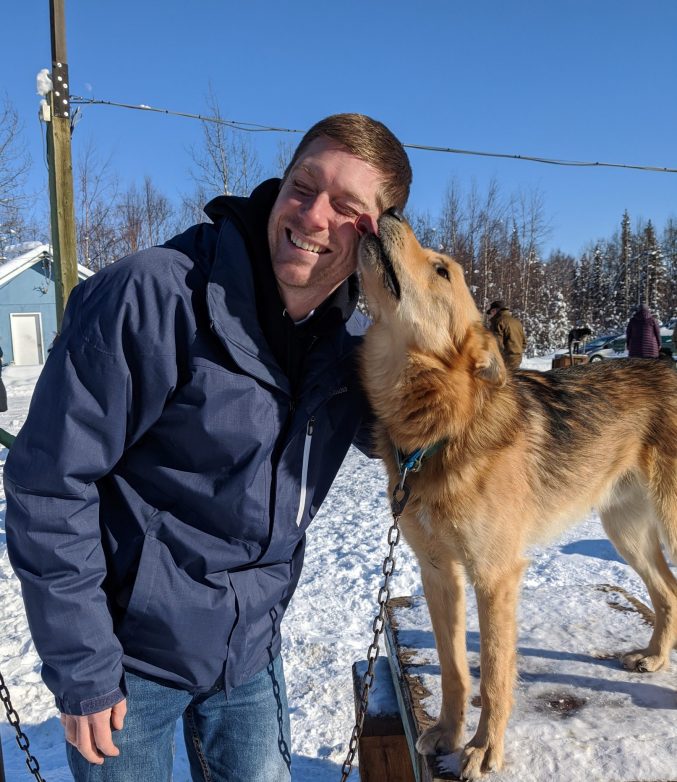 Me with Led Zeppelin of Matthew Failor/Team 17th Dog

As told by Martin Buser:

“We have gained a lot of insight. How long have you been teaching?”

Well there you go, don’t you feel sorry for the students you had in your second year?

“I know that because my wife is a school teacher, and we compare our dogs a lot to children. So we also know that the longer you have been a teacher, the better your teaching is. That’s the same for our dogs of course. We just understand more, we have more insight, we have more tools in our tool chest. In my case I have done it for 40 years now, so we have better equipment, better diets, better research and all that.

The training is still pretty much the same. The diets have changed, and the reliability of the equipment has improved. Not necessarily the way we do things, but everything is more modern, more streamlined, lighter, better and also more expensive.

Training is ongoing. When I tell people it starts before utero, they look at me like “what are you talking about”? But because we pick the moms and dads, we selectively breed dogs based on many, many attributes, I call it the 30 attributes. So when the puppies are born they are predisposed to being successful sled dogs based on all that selective breeding.

So training starts at day 1. Day 1 I’m gonna start carrying those puppies around and hold their feet and hand them to strangers and carry them around everywhere. All those stimuli are done with purpose and foresight and reason to make the dogs as well rounded as possible. Harness work is just one of the many many things that we do with the dogs that is an important part, but is just one tiny little part of being a well rounded dog.” 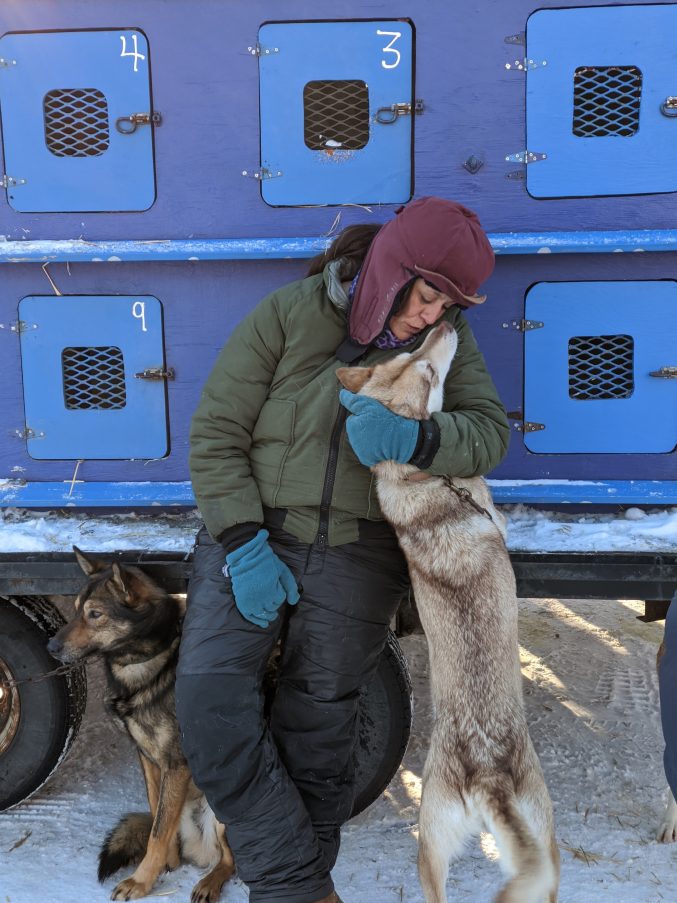 A shot of mine from the 2020 Iditarod pre-race vet checks. Karin Hendrickson loving on one of her pups.

As told by Pam Flowers

“As far as training, in the beginning I didn’t understand the importance of working with the dogs instead of just running them to put on miles. I had a wonderful lead dog in 1983 named Jocko who knew more than I did about dog mushing. For example it didn’t take long before I realized that when we passed an oncoming team, I didn’t have to do anything, all I had to do was stand there and Jocko would lead the team in a perfect pass. I remember coming into Shaktoolik where, of course, the wind was screaming through town. Several teams had taken shelter behind a huge snow drift and there was only one spot open, which was about the length of my team. Some guy said, “You’ll never get your team into that spot, it’s too small. You’re going to have to find someplace else.” As we headed toward the open spot, I gave Jocko a “haw” just as he came up to the lead dog of the team parked at the back of the spot. That took him past that lead dog, over the drift and straight into the wind. He never hesitated, he just kept going as though he knew exactly what I wanted to do. When my sled reached the spot in front of the lead dog Jocko had passed, I called “Whoa.” Jocko and most of my team were now on the other side of the drift, so I called “gee”. Jocko kept the team lined out as he swung to the right until he was directly behind the sled of the team parked ahead of the open space. Just like that, slick as anything, Jocko had made a perfect parallel park.

The guy who had been watching didn’t say anything, he just turned around and walked away. But also watching was legendary Colonel Norman Vaughan who looked at me and said, “Your lead dog will do just about anything you ask, won’t he?” Of course, I said yes. That was the proudest moment of my mushing career. The same thing happened again when we sledded into Kaktovik during a 1985 trip from Kotzebue to Barrow to the Canadian border and back to Prudhoe Bay, which I completed one-handed because my left thumb was broken.

To get that kind of trust you have to work with the same dogs day after day, taking them to different places, working through different problems, and learning the strengths and weaknesses of each dog. Over the years I have learned that my lead dog and I are a team and that the lead dog is as much in charge of exactly where we are going as I am. Together we trust one another and work together, each treating the other with respect.” 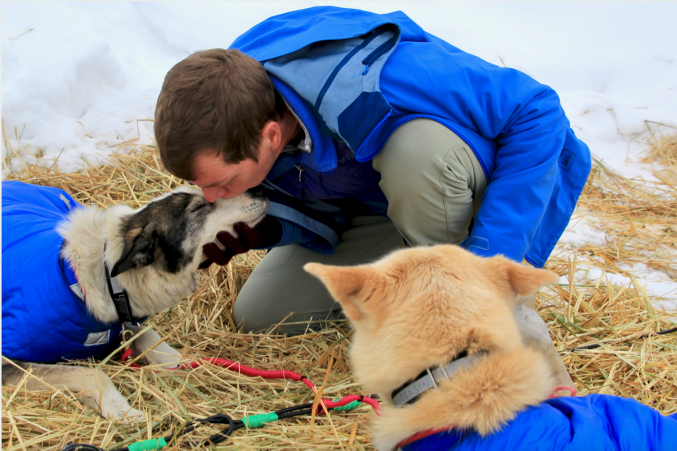 Musher Cindy Abbott with some of her dogs. Photo Credit: Terrie Hanke