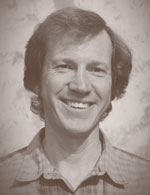 <>Alan Peck, 43, began mushing in 1986, when employed that winter at the Denali National Park kennels where he used freight sleds and large dogs to haul supplies and patrol the Park. The following two winters he handled for competitive long distance mushers to expand his experience and learn more on canine performance and care. Over the past two decades, he has remained involved with dog powered travel while using his own dogs for long distance skijor trips, numerous dog team trips and expeditions including the Serum Run (Nenana to Nome) in 2005 and 2006, and most recently, by participating in races (Knik 200 in 2006 and 2007; Don Bower's Memorial 300 race in 2008 where he received the "Best Dog Care" award). "I enjoy mushing as a recreational pursuit and rely on my profession as a hydrologist to supply the kennel needs. My government service with the National Park Service, U.S. Geological Survey, and currently with the U.S. Fish and Wildlife Service has provided me with an opportunity to travel to the villages and remote areas of Alaska in every season. I have called several places home since arriving in Alaska. I have lived near McKinley Village, downstream of Ambler on the Kobuk River, along the Noatak River and in Yakutat. I spent nine years in Fairbanks were I was employed and I also graduated from University of Alaska (UAF). My current residence is in Eagle River where my wife, Barbara Trost, and I continue to share in this canine hobby." Care, training, and conditioning of their 20 dogs are a year round need. However, during the summer when conditioning the dogs is less intensive, there is time to enjoy a few other recreational activities such as kayaking, backpacking and pack rafting.