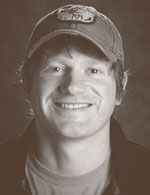 Chad Lindner, 30, was born in Fairbanks, Alaska. He is a graduate of Reed College and the University of Michigan Law School, where he was the Editor in Chief of the University of Michigan Journal of Law Reform. Chad returned to Alaska to run the 2009 Iditarod with his father, long-time mushers and Iditarod veteran, Sonny Lindner. He is training with his father in Two Rivers. Chad says he started mushing as a child and in 2003, he completed the Copper Basin. Chad's mother and stepfather, Sharon and Jerry Story, live in Wasilla. After the race, Chad will return to Boston, Massachusetts, where he will begin his legal career as an associate at the law firm of Edwards Angell Palmer & Dodge. His girlfriend of eight years, Lindsay Kanter, is currently clerking for the Alaska Supreme Court in Anchorage.