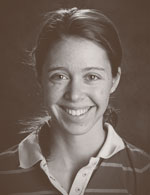 Jen Seavey, 22, was born in Montana. She grew up on large cattle ranches in Montana and New Mexico. She says she's been working with animals her whole live and started training horses when she was six years old. She didn't grow up around sled dogs and didn't know any mushers, but "when I was in first grade, I decided that I was going to move to Alaska and run the Iditarod." Her dad made her a sled out of a milk crate and some old skis. She harnessed her German shepherd in a horse halter and made him tow her around. "When I was 18, I stumbled upon an ad on the Internet for handlers at the Seavey's Iditarod Racing Kennel. After a couple of phone calls, I decided that college would have to wait, and I bought a one-way ticket to Alaska. I met my husband, Dallas Seavey, when he picked me up at the airport. I handled for the Seavey kennel for two winters and worked as a tour guide in the summers. Dallas and I now spend our summers in Anchorage running the WildRide Sled Dog Rodeo." Her hobbies are horsemanship, dog training and writing.