In order to keep track of the dog teams, musher sled bags have booties pinned onto them!  Inside the booties are GPS tracking devices. There are two placed on each musher’s sled.  They not only record the location of each musher’s sled, but they also record the speed with which they are traveling, the elevation, and more!  This year, fans can click on the analytic icon under the musher’s photo on the GPS tracker page and see all this data.  Mr. Matthew Lee is in charge of the trackers.  He even travels to Cripple to change out batteries for each musher’s devices!  See his interview on Faces of the Iditarod (front page of iditarod.com). 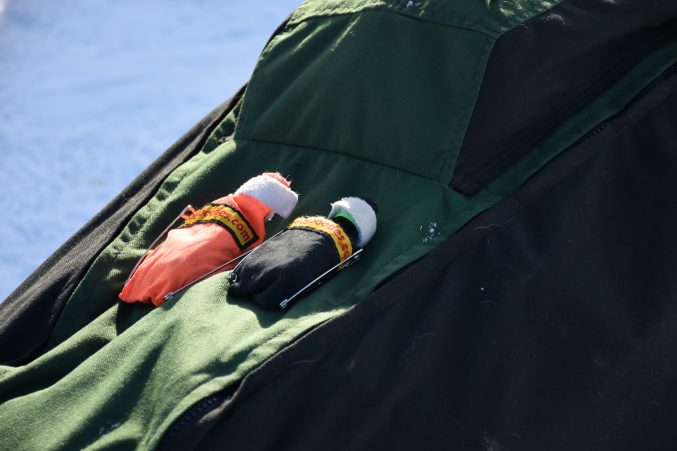 GPS trackers are pinned to every sled.

Jeremy Keller scratched from the race a couple of days ago.  Instead of flying him and his dogs back, the Iditarod allowed him to drive his dogs back home.  He still has his trackers, so you can click on the magnifying glass with the addition sign under his picture, and the screen will zoom the other direction to show his progress toward home instead of Nome!

Even Mrs. Kelly Villar, 2020 Iditarod Teacher on the Trail™, has a GPS tracker on her backpack.  She flies in Iditarod Air Force planes between checkpoints, so her speed is really fast compared to the dog teams!  Check out her stories each day on the Teacher on the Trail™ tab on iditarod.com.

It’s great that we can watch the progress of the teams from thousands of miles away because of these GPS trackers!